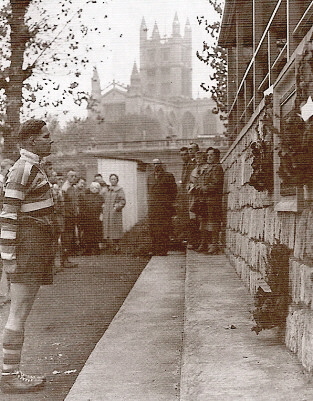 The War Memorial outside the Clubhouse

The following list contains the names of Players who had appeared in the Bath colours at some time, and lost their lives as a result of First World War service. The names were accumulated while scanning through daily pages at the Bath Chronicle Archives or on information provided by relatives. We wish to apologise to any descendants( if any) of players who may have currently been omitted.

Sergeant Alf Cleall killed at the Front 17th February 1915 aged forty. He was a Vice Chairman of the Club.

Private E (Eddie) L Clarke killed in action 8th July 1916. Another Oldfield Park player, who played for Bath ‘A’s, with appearances for the 1st XV. He had emigrated to Canada and returned with a Canadian Contingent.

Lt. Commander G N Biggs. On 9th December 1916, the Bath Chronicle announced that he had been lost at sea. Played one game 1904-5 season.

Lt. Colonel G A Perreau. A Bath Chronicle on 24th March 1917 reported the death of Lt. Colonel G A Perreau of the Indian Infantry, killed in Mesopotamia aged 43. A former Hermitage School pupil and  player, he appeared for Bath from 1891 to 1895, and in Old Crocks XV in the 1900-01 Season.

He was an immediate pre-war player.

Walter Fletcher died in London Military Camp aged 41. He had been invalided home with shell shock. Chronicle Report on 25th May 1918.

Lance Serjeant D (Dave) Fisher, North Somerset Yeomanry. A Bath stalwart immediately pre-war he was wounded in France and died on the Isle of Wight on 22 November 1918 where he was working on munitions. He is buried in the Commonwealth War Graves Commission Cemetery in Cowes (Kingston) in grave reference C435..