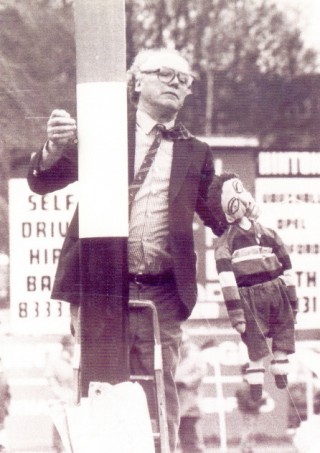 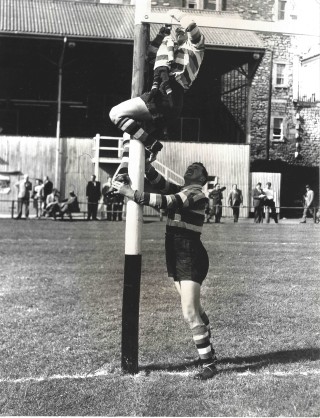 The story of the Rag Doll

A special bond between two rugby clubs, Bath and Llanelli

Bath’s rugby history is full of bonds/rivalries with certain clubs – be it the local derbies against Bristol & Gloucester, the Midlands clashes with Leicester and latterly Northampton or the trips to London to take on the Harlequins and Wasps. The strong links with Wales meant trips to Cardiff & Newport – and of course, Llanelly (Llanelli) – now the Scarlets.
The first recorded game between the two sides was in 1896 and the special relationship with Llanelli started in the 1920s.  The famous “Rag Doll” became the trophy that the teams played for right through to the introduction of leagues – the last ‘Friendly’ game being in the 1990s – when the traditional Anglo-Welsh fixtures finally became a casualty of the new structure for senior rugby. Since then the doll has appeared twice – in the Heineken Cup Quarter-Final of 2002 and the Powergen Cup Semi-Final in 2006. The doll has largely worn Scarlet as of the 139 games played to 2006, the Scarlets have won 94; Bath 38 with 7 draws. The rag doll epitomised the regard and rivalry that the two clubs had for each other and tradition demanded that the doll adorned the goalposts of each game, wearing the colours of the holders (last winners) of the trophy.
According to Bath Archivist, Peter Hall, research and documentary evidence (newspaper reports and old programmes) strongly suggest that the Rag Doll was first played for on 12th March 1921 when Llanelli (then known as the “Tin Platers”) won 16-0 at Stradey Park. The doll was presented to the winning captain by the President of Llanelly RFC, Mr T.R. Mills – the proprietor of the former Salutation Hotel in the town.

Much like that broom used by Trigger in “Only Fools & Horses”, there have undoubtedly been several re-incarnations of the Doll over its 80 year lifespan! The most notable Bath contribution being the doll made by Mrs Rosina Rotherly in the 1930s when she was the licensee of the Queen’s Head in Box. The latest doll will be at least the great-grandson of the original – one doll believed to have suffered a terrible fate – thrown into the River Avon after a particularly famous Bath win at the Recreation Ground!