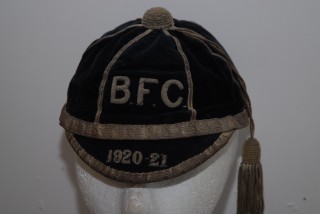 Cap qualification criteria was re-iterated at a sub-committee meeting on 9th April 1896: Messrs F Soane, W Sants, J W Hooper and the Hon. Secretary were of the opinion that Presentation Club Caps should be given to 1st XV players only, and on the following criteria viz., “That next season’s Match Committee be asked after the trial matches to recommend men who have played regularly during the season 1895/96 and trial matches of 1896/7 to receive 1st XV Caps and that subsequently men who play in ten 1st XV matches to be computed from the 1st match of the season of 1896/97 shall be presented with Bath Club Caps.”

At a Management Committee Meeting on 28th November 1911 Club Caps were awarded to Messrs Walwin and Harris and Mr Fear was to have his dated.

At a Management Committee Meeting on 20th March 1923 former winger Les Matthews identified a Second XV cap which was awarded some time during the 1930’s. It was dark blue and grey, with silver tassel. He advised 28 2nd XV games for qualification.