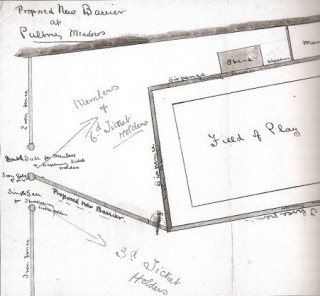 The first field of play on the Recreation Ground in 1894

Suggested beginnings of the Game

“Football” was played in England from very early times, but “only by the baser born” according to J.L.Bevir in his Wellington College Archives. It was played on holidays, mainly in the streets “which suffered damage therefrom”. In Tudor times Sir Thomas Eylot’s described the game as “Nothing but beastlie fierce and extreme violence, whereof proceedeth hurthe and consequently rancour and malice”.

Clearly there were numerous ball games played from ancient times such as the harpastrum or handball of the Roman legions (which has frequently been accepted as the first “organised” ball game seen in the country) such as knappan in Wales a form of hurling in Cornwall and camp-ball in the Eastern Countiues. The Normans had a game called “La Soule” which might claim to be another possible parent.

In the early 19th century something resembling the game as we now know it was “adopted” by some public schools. The boys played dressed in jerseys and trousers. They formed two teams of 25 forwards, and behind them 2 half-backs, one threequarter and 2 backs. There can be little doubt that the game was very rough given that players could hack and scrag an opponent. To hack was to kick whilst “scragging” was to encircle the opponents neck with one arm, pushing his nose upward with the free hand!”

The game of “Rugby Football” derives its name from Rugby School where in 1823 a young pupil William Webb Ellis alledgedly“with a fine disregard for the rules of football as played at the time first took the ball and ran with it in his arms” Prior to him doing so the game of “Football” had been a game of catching the ball and kicking it .In these early days the ball would probably have been a pig’s bladder with no leather cover. There were neither established laws nor consequently any official ways of arbitrating the game so it was left to the team captains to do so with the assistance of two umpires appointed by the teams. Unfortunately some were inevitably biased. In these early times there were no prescribed numbers in teams so it was not uncommon for whole villages to play one another and matches could last for hours or even days! With the formation of the Rugby Football Union in 1871( the founding clubs being Blackheath, Civil Service, Guy’s Hospital, Harlequins, King’s College’ Richmond, St. Paul’s School and Wellington College) the recognised number of players seems to have been 20 per team comprising 13 forwards, 3 half backs, 1 three-quarter and 3 full backs as was the case in the England v Scotland match that year.

Formation of the Club

It was in Bath in 1865 that some enthusiasts for the game (see Other Topics-Facts about the Bath Club for their names) , as it was then played, decided to form a club and this was the beginning of what would become Bath Rugby. For most of its history the club would be known as Bath Football Club. The first name of the club seems to have been Bath Zouaves though why this name was adopted is not certain. It is known that the Zouaves were an elite light infantry corps of the French army drawn from the Berber tribes of Algeria. and maybe the word “elite” held some attraction!

The first jerseys worn by the club are thought to have been dark blue. Players also wore a red cap. Caps were commonly worn in those days .Possibly these colours were adopted in deference to those of the Zouaves’ uniform but it could also have been to replicate the colour of the uniforms of the army of the Union in the American Civil War. Some time later shirts were blue and black hoops but it was not until 1908 that white was added and those colours are still the basis of most of  today’s club shirts.

With the passage of time the club became known as Bath Rovers and then Bath Wanderers, possibly because matches were played at various venues around the City, the club not having a permanent pitch on which to play. Determining where the first games were played cannot be established with any certainty but it is known that matches were played variously at  Claverton Down, Kensington Meadows, North Parade ( now the site of the Bath Cricket Club) Lambridge Meadows (where the club’s previous training facilities are) Henrietta Park (for which a rent of two shillings and sixpence was paid) and finally the Recreation Ground (then known as Pulteney Meadows).It is thought that the earliest matches were played on North Parade. Matches are known to have been played at Henrietta Park  in 1892.   The Recreation Ground was owned by the Bathwick Estate Company) and in 1894 was leased to the Recreation Ground Company Limited. The club had a 39% shareholding in this company. The “rent” was the equivalent of 20% of the gate receipts and 50% of the stand receipts.

The first match played on the Rec was against Exeter RFC on 6th October 1894 Bath winning by the equivalent of 22pts to 0pts.

Because of its early founding the Bath Club is one of the oldest in the country with only the Guy’s Hospital, Liverpool, Blackheath, Manchester, Sale, Richmond, Civil Service and Darlington Clubs pre-dating its formation.

Records and details of matches played prior to 1875 are difficult to establish though there are references to matches played against Ashley Down, Cheltenham, White Cross, Frome, Trowbridge, Bedminster, Clifton, Devizes, Weston-Super-Mare, Swindon Rangers, Bristol Medical School, Wells, Cheddar, Salisbury and Stanton Druids Football clubs. Most of these clubs are now defunct. The first complete fixture list on record is that for Season 1880-1881 when matches were played against:-

As the years passed there was felt to be a need to look for other fixtures and this led to invitations being made to Llanelly FC, Rosslyn Park FC, O.M.T.’s FC, Coventry FC and Penarth FC which usually involved the club making a payment towards the opponent’s travelling and sustenance expenses when visiting Bath .

Whilst progress was being made on the pitch the club’s affairs needed to be administered by a committee and records show that meetings were held in various locations, amongst them the Royal United Hospital (then on the site of the old Technical College now the Gainsborough Hotel) 9 George Street, No.4 Bath Street (for which the room rental was 2/6d per week) No.9 George Street and the Angel Hotel in Westgate Street. The HQ was to become the Talbot Hotel in St.James’ Parade whilst visiting teams were entertained to tea at the Red House followed by more rowdy entertainment at the Full Moon Public House in Upper Borough Walls or the Christopher Hotel in Bath High Street.

Prices of admission for the 1st XV matches were 3d, 6d and 1shilling( for a reserved seat). A ball cost 9d and a jersey 3s 11d.

Match day programmes were produced by the Bath and District Supporters Club in 1922 and in 1923 by the Bath Club when Hardings of Newark Street were granted exclusive right to sell programmes “of an improved type” at a cost not exceeding 1d.

As the years passed the standards of play improved and inevitably better players were attracted to the club, amongst whom was Frederick Belson (the first Bath player to represent the British Isles against Australia in1899), Frank Soane, Herbert Fuller and Francis (Frank) D’Aguilar to name but a few. By 1907 Bath had entertained their first opponents from across the channel when Racing Club de Bordelais came to Bath.

The Bath Club’s Golden Jubilee was, of course, due to be celebrated during the 1914/15 season but this was not possible because by August 1914 Britain was at war. With a number of players and committee men “off to the front” (some of whom were to spend virtually the entire war in prisoner of war camps and some never to return) it became impossible to fulfil fixtures until victory was achieved. However a fixture was played in October 1916 against the Army Cyclist Corps to raise funds for the war effort.