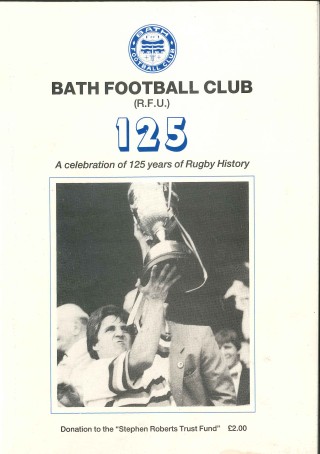 In 1990 the Bath Football Club celebrated its 125 Anniversary

A celebration of 125 years of rugby

“This season 1990/91 is a significant milestone of 125 years of the Bath Club history. Many hundreds of players have appeared in various presentations of the blue, white and black, to contribute their many athletic skills towards the development of the magnificent game of Rugby Football that we play at Bath today. So much that was altered, so many rich personalities, are all part of this club’s story. This publication will seek to remember some of the old times, and also whet your appetite for the many good times to come.”

The Club was in its 125th year and there were events to commemorate this anniversary.

Bath took a large party for a three-week’s tour of Australia, uniquely sponsored by Admiral Sports UK Ltd. Unfortunately, six of Bath’s Internationals were required for England training prior to the Argentina Tour and so were unable to tour with their Club.

The outward journey included a stop-off at Bangkok, where Stuart Barnes insisted that only training was on the itinerary! David Brown was the very efficient Tour Manager and he was accompanied by Club President Alec Lewis.

In uncomfortably hot weather, there was a 27-24 win against Cairns Barbarians. Tries by Swift, Bamsey, Steve Knight and Stuart Barnes (who also converted all four) and added a penalty goal for good measure.

On Sunday 12th August Bath played a combined side under the banner of Darling Downs and drew 19-19. Tries by Adebayo, Chilcott (2) and Barnes, who added a drop goal. Then on to Brisbane where they lost to Queensland 19-21. Tries:- Steve Knight (2) and Victor Ubogu. Barnes contributed another penalty. The final game was against Randwick, where with an under-strength side, Bath lost 3-19. Barnes dropped a goal.

It was a very successful and constructive tour, and provided valuable experience for several youngsters, putting the whole side in good spirits for the oncoming domestic programme.

Winners of the Worthington 7’s

Sunday, 28th April 1991 Bath were the winners of the WORTHINGTON NATIONAL SEVENS TOURNAMENT on the Recreation Ground. The Trophy presented to Bath by Captain Michael Pearey R.N., President of the Rugby Football Union in front of a 5000 crowd.

Interestingly, he was the father of Alan Pearey, journalist, who reported for the Bath Chronicle for several seasons.

At the photo call a Worthington beer “shampoo”,  was of course, liberally dispensed!

The successful Sevens squad was:- Fallon, de Glanville, Lumsden, Ojomoh, Lewis, Haag, Adams and Callard (Captain). They beat London Irish, Rosslyn Park and Harlequins in their path to the Final. They won the Trophy after beating Leicester 24-10. Hero of the hour was Gareth Adams, who scored two tries in the Final. Audley Lumsden’s pace was a deciding factor and Martin Haag’s speed around the pitch and general work-rate, was phenomenal.