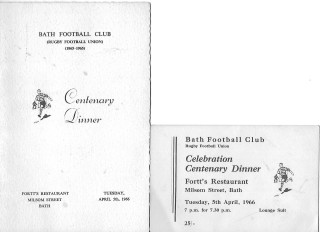 Invitation To Centenary Dinner. Front Page of order of Service. 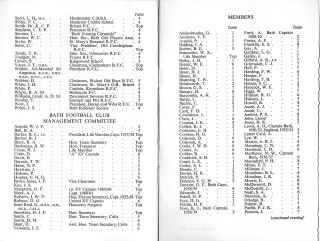 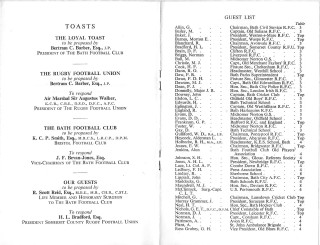 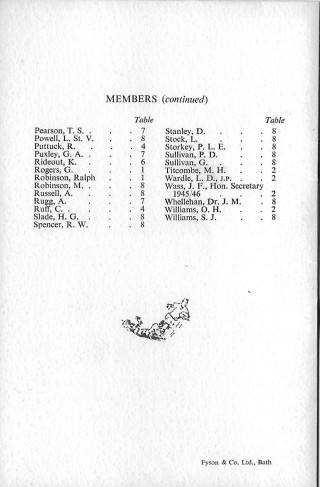 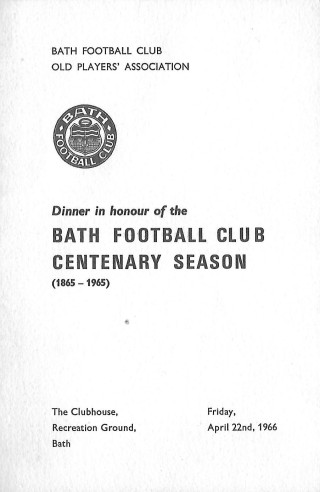 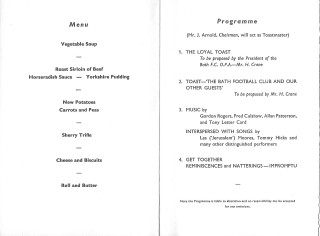 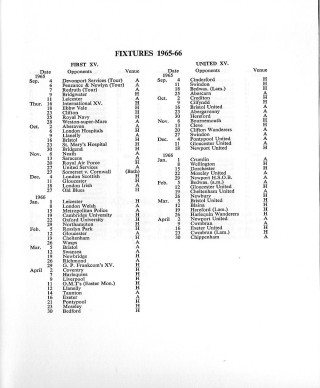 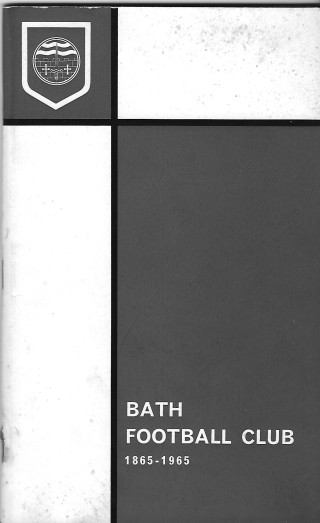 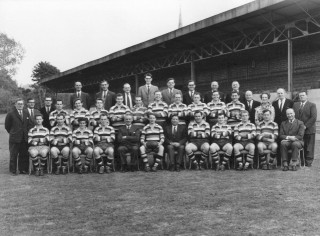 Arrangements were made for a Centenary Match against a Royal Navy XV on the 25th September 1965 with the Royal Marines Band in attendance to beat the Retreat. A Bath Rugby Centenary Tie was produced to mark the occasion.

Centenary Booklet produced for the 1965-1966 Season

“Bath can be immensely proud of its record of being one of the pioneer clubs of the rugby code in the history of the game. The West Country, has justifiably, a great reputation for being a stronghold of Rugby, yet there is no other surviving West Country club with a formation date earlier then 1872 – only a few of the older schools and colleges can share this distinction. Down the years your club has contributed so much to the game – your teams have a reputation for always playing in a manner in keeping with the best traditions of this great amateur sport, you have produced players of distinction whose names are so deservedly recorded in this history and the hospitality which is so generously extended to visiting teams is renowned, with the ladies section more than playing their part. On behalf of the Rugby Football Union Committee I thank your Committee and members, past and present, for the outstanding contribution your club, with its famous ground and clubhouse, has made to our game for 100 years and extend every good wish that the Centenary Year will be as successful as this great record deserves”,

Well played Bath Football Club – the completion of a century in any field is a cause of much satisfaction. That the club has now attained such an age is something of which all Rugby followers will be mighty proud. We are the ninth oldest Rugby Club in the country and can, in modern jargon, truly claim we are in the Top Ten. What of the past 100 years? We have had our triumphs and our disappointments. We have provided players for the National XV’s of England ,Wales, and Scotland, for the county of Somerset in particular and numerous other counties who participated in the championship and an abundance of players who although not gaining honours have been great club men-both on and off the field of play. It is not for me to give details- that is the object of the excellent souvenir book. A painstaking and hard working committee have spent many hours in collecting the information given you and our sincere thanks are due to them and all those good people who have sent along old records and accounts of the club happenings. The local press was good enough to give us all access to their files. What of the future? We have use of an excellent ground, a splendid club-house, a first class fixture list, a strong Old Players Association. To maintain this standard we must have a large membership and I appeal to all members to mark this year with their united efforts to enrol new members. Let us in this way pay tribute to those who, 100 years ago, met together and formed the club and to those who over the years have fostered it and built it up to its present honoured position in the world of Rugby Football. Let us all work for the future of the club so that when it is time to publish the Bi-Centenary Souvenir book those responsible will again be able to say Well Played Bath Football Club . To the Club I offer my sincere congratulations and good wishes for the future and my thanks for the very happy times as a member.

The game had everything-thrills,perfect passing movements wonderful forward play, breathtaking running -and though Bath’s dream victory did not come true, they hardly did themselves any harm by this performance. From the kick off ,facing a side containing 13 internationals , they were up against it,and times, certainly, it looked as if they might disintegrate before the visitors power play. Yet skipper Gordon Margretts kept them going with admirable fortitude by personal example and it spoke highly of their efforts that the international did not take a lead for the first time until less than 10 minutes from the end. Bath Chronicle Quote Freddie Williams , Phil Hall, and Davis Gay played heroically, and Peter Parfitt led his pack magnificently, for the internationals Welsh captain Clive Rowlands, was the tactical general. The Referee was Air Marshal Sir Augustus Walker K.C.P C.B.E D.S.O D.F.C A.F.C, R.A.F. and President of the R.F.U.

The evening Dinner at the Octagon was as enjoyable as the game. On this Day Bath Football Club (R.F.U) Centenary book went on sale at the Recreation Ground Price 12/6d.

Geoff Frankcom’s side suffered a number of late withdrawals , and in consequence were no match for the regular Bath line up. To complicate matters, the celebrity side lost Pat Briggs with a broken finger. Vaughn Williams had a grand game, ably served by John Millman. Of Williams, his distribution certainly could not be faulted and Bath’s centres Peter Sibley and Brendan O’Mara, given the room in which to move, used their contrasting styles to great effect. Sibley’s clever change of pace and direction took him through the defence time and again while B O’Mara’s sheer determination carried him further than would normally expect.

( Bath Chronicle 31/03/1966) John Monahan, playing on the Frankcom’s XV wing, had the distinction of scoring against his usual teamates. John Cousins had a field day with four tries, using his long stride to outstrip a flagging opposition.