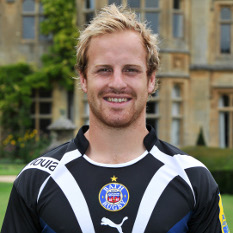 Nick Abendanon burst on to the scene during the 2006-07 season, scoring 10 tries in twenty four 1st XV appearances for Bath Rugby.

A strong tackler, balanced runner and dangerous counter-attacker, he quickly established himself as Bath’s first-choice full-back.

He earned his first England cap in South Africa – the country of his birth – in June 2007. He was capped again against France in August 2007, but narrowly missed out on a place in England’s 30-man World Cup squad.

Some fine performances since then have seen him rewarded with call ups for the England Saxons from 2008-2011, and his impressive performances in the Churchill Cup victory in 2010 resulted in him being named the Player of the Tournament. Clearly NIck was a player who under a different regime would most probably have had many more full International caps.