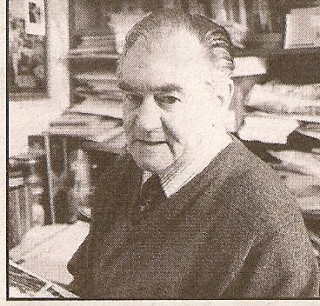 Achievements: Club Captain 1947/48, President, Secretary and Chairman of the Past Players Association

No one can say that Tom Hicks led an uninteresting life. Far from it.

Tom, who served under five different city engineers, is one of Bath’s most celebrated medal winners. He was a sergeant in the sappers during the war and earned the Military Medal, plus twice being mentioned in despatches, once for beach minefield work.

He was blown up by mines, severely wounded and invalided back to England in 1944. Here he joined his old Bath Rugby Club friend Curly Halse who was also recovering from wounds received in Normandy.

In 1952 Tom Hicks received the Queen’s Award for Brave Conduct during the Bath floods. Tommy made the headlines for his courage when faced with the Bath floods in 1960 and 1969, helping people who were threatened by the rising waters and in 1969 he was awarded the British Empire Medal

Throughout his life he kept up his rugby interests. He captained Bath Rugby Football Club in the 1947/8 season and went onto receive a Somerset County RFC cap. He was a past President and Chairman of the club’s old players. He was chairman and a trustee of Walcot Old Boys RFC and treasurer and trustee of Bath and District Rugby Insurance Fund.

Bath’ s rugby fraternity will find it hard to believe that Tom Hicks has actually burnt his boots – and at the age of 64 he sadly says, “I’ll never play again”

In Bath if you talk rugby and start mentioning former players who have influenced the game in this city, the Tom Hicks is a name that inevitably will crop up.

Tom, who began playing rugby for his school in Walcot when he was 13, went on to captain Bath in the 1947/8 season and a year later he gave up the first class game

Out for a year, he got a call one Saturday “ come and play for us Tom”. It was an appeal from Walcot and it was the beginning of an association that lasted for many years

As Tom put it he was now one of the club’s old corps of odd job men and he would always be found on Saturday’s during the season on Walcots’ Lansdown pitches marking them out, making the tea and cleaning up the dressing rooms.

Tom played his last game of rugby last year. His ambition, however, was to turn out once more on a rugby pitch. “I wanted to celebrate being 65 by playing for the club but an operation on an ankle has put paid to that, and there’s no chance of me ever playing again. That’s why – to resist temptation – I actually took my boots out of the bag and burned them. I was a bit of a private wake and I felt sad.” he said

Tom’s activities at the Walcot Club is his way of putting something back into the game that has given him great pleasure for over 50 years.

Back in the early 1930’s he was a member of a very successful Bath schools’ team. It was thanks to three men – Albert Freethey, Harry Slade and Captain Stan Amor that he got the chance to continue rugby. They thought it would be a shame that the schoolboy team should be lost to the game. “They roped most of us together and organised a meeting at the Volunteer Arms off New Bond Street where Harry, who played for Bath, Somerset and Combe Down, was then the landlord.

Tom was just 14 and had recently left school to work in Bath City Council’s engineers department from which he retired after 47 years service. He was highways Superintendent on his retirement.

He had played for Bath Boys, Somerset Boys and was an England schoolboys trialist.

Among those founder players was Tom’s life long friend Curly Halse who made his debut in the Bath 1st XV in 1936, and went on to play for Somerset and the West of England as a scrum half.

Tom’s chance to play for Bath came in 1937 against London Welsh and he recalls his debut. Fifteen minutes after the start an “unintentional kick in the kidneys” led to him being a virtual passenger on the wing. He remembers it was the club’s international R A Gerrard who was running the line in Tom’s first game for Bath United. “It seemed I had a reasonable game on the wing getting four or five tries” “ Gerry’s replacement when he was on international duty was injured and he said “play Tom, he’s a promising kid”. So in the space of a week Tom made his appearance in the United and 1st XV sides. However, as a first teamer he had to be content with being in and out of the side, until the war came and Tom and Curly were among the Bath members of the Royal Engineers to go to war.

“That indirectly can be laid at Gerry’s door. He was a TA officer and he more or less ordered us to join his unit of the Terriers – which we did”

During the war he brought his RE 204 Field Company to the Recreation Ground to play Bath. It was his company commander’s idea he explained. He’s got a treasured press cutting of that drawn game.

After the war Tom came back to Bath and enjoyed his moment of glory when he captained Bath in the 1947/8 season. In those days however the council employees worked on Saturday mornings. With a family to bring up and losing Saturday mornings pay every time Bath played away, Tom reluctantly had to give up the first class game.

However, after a year from the game he was back – this time with Walcot and over the years he has taken his part in rugby administration. He has held every office with Walcot, except Treasurer, and was a trustee. He also carried out 2 spells as secretary of the Bath Old Players Association.

Tom collected a treasure trove of memorabilia of the rugby game at Bath. Pictures, cuttings, books – could all be found at his home in Station Road which has been entirely taken over by rugby and his other love – 204 Field Company Royal Engineers

He said ”rugby, like life, has speeded up considerably and to make the top grade in the game a player now has to be completely dedicated to supreme fitness and training”. Tom said that players of his era feel a little of the fun has gone out of the game because of the win at all costs principal.

The obvious cause is that there are now so many competitions in both junior and senior rugby and the win at all costs principal is also responsible for over robust play.

“Each year referees have to attend courses to keep up to date with the legislation. They have an extremely difficult task and may very well be carrying a pocket computer in the future to assist them in making decisions. Unfortunately the days have long since gone when the referee, players and spectators alike knew exactly why the whistle went”

A Bath rugby veteran and local hero has celebrated his 80th birthday in the city he promised never to leave. Tommy Hicks MBE, a well-known character in the sporting world of the city, was joined by a crowd of more than 200 old teammates, family and friends for the event.

Born in Walcot in 1920, the great grandfather has held a life long affection for Bath and is well loved in the community. After joining the Territorial Army in 1938 he was called up 2 days before the outbreak of war while on holiday in St Ives.

As a platoon sergeant he saw six years active service with the 43rd Wessex Division and received the Military Medal. In 1942, after being wounded in the battlefield in France, Tommy returned to his hometown and, still in his khaki uniform, wandered up to Sham Castle on Bathwick Hill. He said, “ I sat looking out over the city and I swore I would never leave Bath again and I never have”

Tommy has been a familiar figure in the city since he made his debut for the Bath rugby team aged 16. A keen player until he was in his 60’s he is a firm fixture around Walcot rugby club and still helps out with odd jobs.

A keen collector of memorabilia from the Second World War, Tommy said that some parts of his house are like a museum, filled with photos and newspaper clippings of the old times.

Tommy has seen his four children, nine grandchildren and four great grandchildren grow up in and around Bath. His son, Tony, played for the Bath Club during the 1970’s.

The celebrations for the 80 year old were enjoyed by young and old alike and he received a cake decorated with the shield of Bath Rugby and the Walcot RFC badge. After the gathering, Tommy wished to thank everyone for their kindness and their gifts