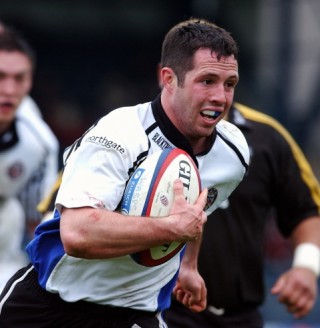 Gareth Cooper was a little known player when Bath Rugby swooped to snap up the talented youngster from his local side Pencoed (near Bridgend) at the start of the 1998/1999 season, but it soon became evident that the club had unearthed a gem of a scrum half. Following in the traditions of the great Welsh half backs of yesteryear, Cooper possesses a blinding turn of pace from the base of the scrum and has a keen eye for the gap. He made his Bath Rugby debut as a replacement for Scottish international Andy Nicol on the 20th October 1998 in a 3-24 defeat at Cardiff in a friendly match that was anything but, having spent a short loan period at Cardiff. Prop Victor Ubogu was in fact sent off in the second half of that match by a local referee who seemed well out of his depth. Cooper made a second replacement appearance at home to Swansea, before gaining a first full start in the return fixture with the All Whites at St. Helens. It turned out to be a match to forget for Bath as Swansea won 50-17. Undeterred by this experience, Cooper made a winning league debut in a 32-30 victory over Sale and crossed for his maiden Bath tries in successive matches, firstly against Cardiff at the Rec., and then at Saracens. Quickly establishing himself as first choice scrum half at the beginning of the 1999/2000 season, injury robbed him of his place in November and it wasn’t until February 2000 that he returned to first team action, as a replacement for Jon Preston at home to Bedford. The season 2000/2001 was to be the complete antithesis of the 1999/2000 campaign as Cooper could do little wrong. His performances for Bath, in which he scored eight tries in 21 matches, ensured a call up for the Wales ‘A’ side in matches against New Zealand ‘A’ and South Africa (against whom he scored a try). With Rob Howley injured, Gareth was called up to the senior side for the Six Nations clash with Italy in Rome and celebrated his selection by crossing for the first try for Wales in a match that they won 33-23. He kept up his excellent work by winning a further two caps on the summer tour to Japan, before injury forced him to miss a swathe of the 2001/2002 season, giving compatriot Andy Williams an extended run in the side. Towards the end of the year though it was almost service as normal a Cooper fought his way back to fitness and a place in the Bath Rugby number 9 jersey that he had always worn with distinction. After regularly appearing in the scrum half role in 2003/2003 Gareth moved back to his native Wales in order to improve his chances of international selection. He signed for the fledging Celtic Warriors and played a full season before they disbanded in the summer of 2004 and ‘Coops’ joined the Newport-Gwent Dragons. From there he joined Gloucester in 2007 and subsequently Cardiff Blues in 2009.