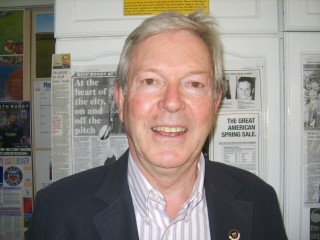 September ‘64 – played in Bath FC trials and was selected at full back for the season’s ‘warm-up’ game (Jack Simpkins XV v Bath Combination XV) in preference to Chris Harvey who had introduced him to the club!

David joined as a full back, but was used as a utility back. Played for 1st XV at fullback, centre and wing three-quarter, and also at fly-half for the United XV.

While working in Ghana between 1967 and 1970 he captained Accra RFC and the Ghana XV in two Annual Internationals vs. Nigeria
Was on the Club’s tour to Holland (The Hague) and played on the wing in both games.

A Chartered Accountant at one time in partnership with Dave Robson and Tony Swift.