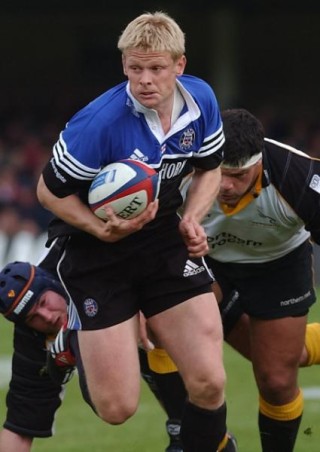 Career details: Iain stared his playing career as a youngster at Preston Grasshoppers RFC.  Leaving Bath in 2004 he joined Leeds Tykes making 26 appearances. In 2006 he joined Gloucester and made 39 appearances before departing in 2009 to join Biarritz  Olympique making 69 appearances.

Flying wing cum full-back Iain Balshaw has an enviable strike rate for Bath Rugby having notched almost a try every other game since making his debut back in the 1997/1998 season. The jet-heeled product of Stoneyhurst College made his maiden Bath Rugby appearance as a replacement for Jon Callard against Brive in the Heineken Cup clash in France in October 1997. His first full start was quick to follow as he was selected for the 60-15 home win over Oxford University nine days later, responding with a try and four conversions. Iain’s league debut was on the 18th October in a 44-15 win over Bristol. The first season saw him register 23 points in only ten matches (five as a replacement), but he really came into his own the following year. After initially bedding in for the first three matches of the season Iain found himself on the bench for the home clash with Gloucester. Re-instated a week later he crossed against Bedford and didn’t look back from there ending the campaign with 17 tries from 32 matches, including a hat trick at Saracens. The following campaign was to mark a personal milestone for Iain as he won his first England cap as a replacement during the Six Nations clash with Ireland. That selection was due to the outstanding displays he was putting in every week for Bath. Indeed, after winning his first cap Balshaw went on a run of scoring, crossing for 14 tries in only 12 matches, including braces in successive matches against Saracens, London Irish and Bristol. His star reached its zenith during the 2001 England season after he was introduced as a late substitute in the 21-19 win over Australia at Twickenham, initiating the match-winning try for Dan Luger with a delicate chip over the defence. In so doing, Iain earned a starting spot in the Six Nations Championship and proceeded to shred apart the opposition defences from his deep lying full back role. Iain ended the Six Nations with five tries to his name. It was a leaner season at club level, with only seven tries to his name mainly because opposition defences became more wary of the Bath flyer, denying him the time and space in which to weave his magic and consequently nullifying his undoubted threat. After an injury-plagued summer, Iain returned to snap up a winning try against Gloucester, before a nine match barren spell, ended with a score at home to London Irish. However, his star continued to shine and was emphasised with a wonderful solo try against Wasps in the Play Off Semi Final earning him a place on the 2001 British Lions tour. Unfortunately for Balshaw, what should have been a dream trip turned into a nightmare experience as he was asked to do a different job for the Lions to that of his England role and his confidence suffered accordingly. Went the whole of 2001/2002 (23 games) without a try to his name, something that would have been unthinkable the previous year, and suffered extensively through injury in the following seasons, playing just 16 times for the club, although he did manage to recover to play a part in England’s 2003 Rugby World Cup success in Australia, going on to be awarded an MBE and the Freedom of the City of Bath. Iain’s final game for Bath proved to the Powergen Cup Quarter Final exit to Leeds Tykes at Headingley where he signed off with a well-taken try. He must have impressed the Tykes’ hierarchy that day, as shortly before the end of the 2003/2004 campaign the club announced that he would be leaving the Rec. to re-align himself alongside former Bath coach Jon Callard at the Yorkshire club in a boost his career back into gear. From Leeds he moved to Gloucester and then finished his playing career with Biarritz Olympique in the French Top 14 league. Is an occasional TV pundit. Since 2013 has run a Rugby Fanzine www.rugbypigs.com