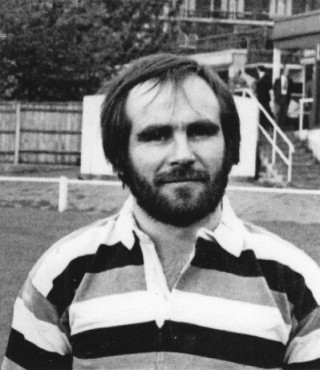 Jim was a student maths teacher at Pentre Grammar School Rhondda in 1967-68 and went on to teach Maths at Brislington Comprehensive School – a fair but strict teacher! He finished his teaching career at West Somerset School in Minehead.

Jim learned his rugby at Isleworth Grammar School. He then studied at Bristol University (whose rugby team he captained) after playing briefly in the West Wales League. He joined Bath in the 1968-69 season where his exciting running style earned him a 1st XV place. He made his debut at Ebbw Vale in September 1968. Jim eventually played over 400 first team games, mainly at full-back, but also occasionally at centre, on the wing, or at fly-half! He scored more than 600 points including 43 tries. Jim played on numerous occasions for Somerset, whom he captained, and for Western Counties against the Fijians and the Springboks. He went up to Oxford University in 1974 to further his teaching career and won a Blue.

Jim was an outstanding fullback.  He probably gave more scoring passes to his wingers than any other full back. His ability to straighten the back line and provide space for his wingers is legendary.

A clever and fast running full back, who often ran from deep positions to link with his 3/4’s, he was a major contributor to Bath’s running style of play taking advantage of a new law prohibiting direct kicks to touch from within one’s own 25.

Jim has played for his home town club Minehead Barbarians. He taught at West Somerset School in Minehead. His daughter Danielle (Nolli) has been capped 82 times for England Women’s Rugby team and was in the England Sevens squad for the 2016 Rio Olympics.

Jim made his first appearance for Old Isleworthians R.F.C. during the 1961-2 season while still attending Isleworth Grammar School. He made numerous appearances for the Old Boys especially during vacation periods while at Bristol and Oxford Universities. His last senior appearances came during a club pre-season tour to Devon in September 1974. He was also to make an on field appearance during the O.I.R.C. 50th Anniversary celebration matches at Wood Lane, Isleworth in September 2007.