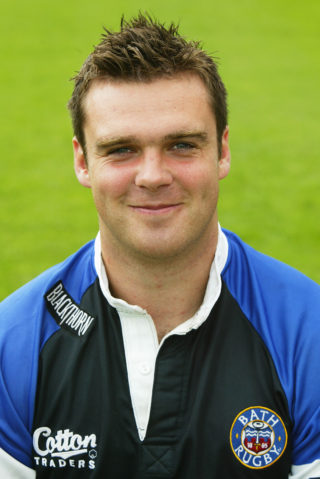 Scrum half Martyn Wood spent the majority of his first class rugby career at London Wasps after being spotted playing in his native Yorkshire by Nigel Melville, the Wasps coach. Martyn impressed during his spell with Wasps, enough to be called up for England for the North American tour in 2001. It was during this tour that he gained his first England cap, playing against Canada in Burnaby (where he scored his first test try) and against the USA in San Francisco. He had tasted international rugby previously having been selected for England U18s, Colts and U21s. The arrival of Wales and British Lions scrum half Rob Howley at the start of 2002/2003 limited Wood’s chances at Wasps and he decided to try his luck elsewhere. After playing for England ‘A’ in their victory in the inaugural Churchill Cup in the summer of 2003, Wood (having signed for Bath Rugby just prior to the tour) returned to the Rec. to stake a claim for the number nine jersey. His first appearance for Bath was in the pre-season match with the Celtic Warriors at Pontypridd and his competitive debut followed at Headingley in the league clash with Leeds Tykes. Martyn went on to make thirty appearances in his debut year, also claiming a first club try in the European match away to Colomiers on the 10th January. Widely regarded as having one of the best passers in England, Wood was flown to Australia in October 2003 as cover for the injured Matt Dawson and Kyran Bracken for the Rugby World Cup. However, the duo recovered quicker than expected and Martyn flew home 48 hours later without officially joining the tour party.

In 2019 he was appointed Director of Rugby at Leeds Carnegie RFC.

On occasions he has sat on RFU Disciplinary Panels.