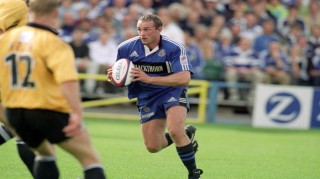 Signed in the winter months of 1999 from Canterbury Crusaders, Angus Gardiner went on to become one of the most consistent Bath Rugby players of his era. The mobile, aggressive flanker could always be relied upon in the loose and with his support play second to none; Angus soon became a big hit with the Bath faithful. The Bath supporters had to wait for their first glimpse of Gardiner though, as his contract with the Crusaders meant that he was unable to join the club until after November 1999. He consequently made his debut on World Cup Final day (6th November 1999) in a routine 24-20 win over Bedford Blues at Goldington Road as a replacement for Gavin Thomas. His performance boded well for the future and he was immediately installed into the starting line up for the next match, his home debut against Newcastle. The first try for the powerful Kiwi arrived in the Heineken Cup clash with Padova in Italy and he followed that up with a score a week later at London Wasps. These were to be his only tries in his debut season. After completing twenty matches in that first year, injury was to hamper Angus half way through the 2000/2001 campaign, causing him to miss ten matches. Upon his return to action in the Phil de Glanville and Adedayo Adebayo Testimonial match with Bristol he proved his worth once more, and after recovering fully made a welcome return to competitive action as a replacement in the home win over Wasps. Gardiner then crossed for a third Bath try in the Zurich Championship play off win over Newcastle at the Rec. before completing his final game with the club at Twickenham in the Zurich Championship Final. Whilst with Bath, Angus earned England ‘A’ honours and when he left Bath at the end of the 2000/2001 season to join Beziers most fans felt the club had let him go criminally early.

Angus was appointed as Team Manager for the Canterbury ITM Cup.

In 2012 he was appointed as Team Manager at Crusaders Rugby. In 2016 he was promoted to General Manager at the club.