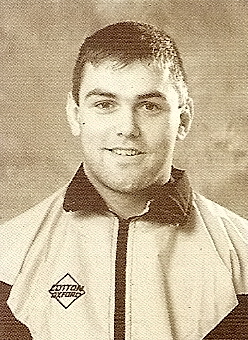 Scottish international number 8 Eric Peters marked his Bath Rugby debut with a trademark try in a 19-27 friendly defeat at Stradey Park, Llanelli in October 1993. The affable back row man went on to play 93 matches for the club in an injury plagued Bath career and scored 19 tries. Previously with Old Brentwoodians and Saracens, his time at Bath was brought to a premature end when he shattered his kneecap in a freak accident at the Rec. during a league match with Leicester Tigers in April 1999. His final try for the club had come a week earlier in a 33-14 win at Saracens. Eric battled for full fitness, but was eventually released by Bath, only to bounce back by signing for Harlequins. He suffered a further injury set back while at the London based side, but showed admirable determination to recover and was an integral part of the Exeter Chiefs side that reached the Powergen Shield Final at Twickenham in 2002. Such was his remarkable recovery, Eric found himself recalled to the Scotland squad and hoped to add to his 29 full caps, which yielded five tries. He also played seven times for the Barbarians and featured twice for Cambridge University in the Varsity Match at Twickenham. Eric made his Scottish debut in 1995 against Canada, but had previously represented England at under-21 level and in the Students World Cup before switching nationality.

A Chartered Surveyor by profession.