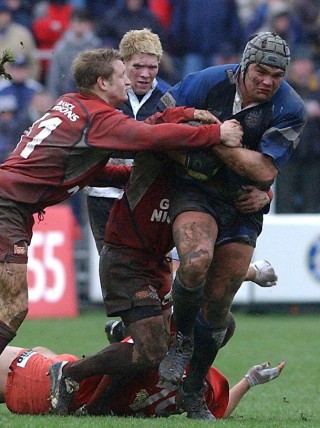 Born in Durban, South Africa, Matt Stevens was a Junior Springbok at under-18 and under-19 levels and came to England with a reputation as being a fearsome scrummager. Stevens joined Bath in September 2002 and was almost immediately selected to attend the Senior National Academy Squad. Nicknamed SOS (Son of Shep) at the Recreation Ground, Stevens holds a British passport and was thus selected to play for England under-21 during the 2003 under-21 RBS Six Nations Championship. The 6ft, 15st 2lb, prop forward made his senior Bath Rugby debut as a replacement for Frenchman Alessio Galasso in April 2003 in the Parker Pen Challenge Cup Semi Final First Leg match at Vicarage Road. His performances in pre-season led to a regular berth on the bench for Bath at the start of 2003/2004 and made his full debut in the 75-11 thrashing of L’Aquila in Italy in December 2003. It was a memorable month for the young prop as he claimed a hat trick of tries in the rout and followed that up by crossing again in the second leg a week later. This in turn led to England coach Clive Woodward selecting Matt for the non-cap World Champions Challenge Match at Twickenham against the New Zealand Barbarians following the withdrawal of London Wasps’ Mike Worsley. To cap it all Matt managed a try in the 42-17 England victory. Such was his impressive form it was no surprise to see Matt fast tracked into the full England set up and he was called up for the 2004 summer tour to New Zealand and Australia. It was there that he made his international bow coming on as a replacement in the first test defeat to the All Blacks in Dunedin and repeating the feat a week later in Auckland. An injury sustained during that run on meant that Matt was unable to compete for selection against Australia, but he is sure to figure again in the near future.