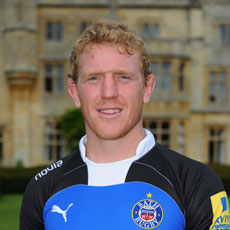 Arriving at Bath Rugby in 2010, Sam Vesty brought a wealth of talent and experience with him from Leicester Tigers.

Vesty, an all-round footballer with a varied kicking game and excellent running skills, was a great asset to Bath Rugby, and had the ability to bring out the best in others around him. In 28 appearances for the Club, Vesty has scored 60 points, including two tries.

He won representative honours with England U18 and 21, as well as the England Saxons who he played for in the 2006 Churchill Cup in the USA. His full international call-up came in 2009 against Argentina gaining two caps as a replacement.

Sam was the fourth generation of his family to play for Leicester.

Sam is a well respected coach having been at Worcester Warriors. Is now  the Attack Coach at Northampton Saints in the season 2018-9.

Sam is an all round sportsman having played Wicket Keeper/Batsman for Leicestershire CCC 2nd X1 and County Tennis.