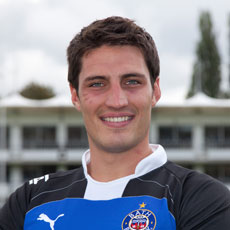 Career details: Scott Hobson was forced to retire from the game through injury.
The 24 year old sustained a severe shoulder injury during a pre-season friendly against Aix-en-Provence in 2010, and was unable to play again. . He had made eight first team appearances for Bath, and made a big impression as well as scoring a try.
Speaking about the decision, Scott said: “It has obviously been incredibly difficult for me, especially not knowing whether I would be able to play again during the early months of my rehab. However, having sought the advice of medical professionals I need to take it
“I love rugby and want to stay within the sport where I can. I’m looking to move into coaching and have already done some with the Bath University team and the Academy here at Bath, so I’m hoping to continue that, as well as possibly going back to University to study.
“I’d like to thank the Club for all their support over the last two years. The experience of working in both the commercial and marketing departments has given me a great opportunity and I know will have benefited me as I look to start my new to play since. On the advice of medical professionals he has now made the difficult decision to retire from the game.