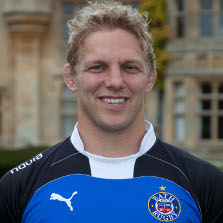 Career details:
It is always sad to see players forced to retire due to on-going injuries and certainly heart breaking for the player himself. Lewis retired from all rugby in March 2012 due to his failure to fully recover from long standing shoulder injuries. Politely known as Mad Dog, Lewis epitomises the professional rugby player – dedicated, committed, exceptional work ethic, skilful, quick, strong and a thoroughly nice guy. He made telling tackles to stop attacks from the opposition and was as quick to the breakdown as any flanker in the Premiership.
Lewis joined Bath Rugby in 2010 following a 14 year spell at Leicester Tigers. The England captain accumulated an impressive 71 international caps as well as touring New Zealand with the British & Irish Lions in 2005. He featured in all 7 games prior to the England World Cup triumph in 2003 and captained the England 2011 Rugby World Cup in New Zealand.
Lewis had extraordinary commitment and willingness to hurl himself into the line of fire with scant regards for his own safety. He was a fighter who had total disrespect for his own body and knew only one way.
Before each game Lewis would go to the local cinema to relax, help calm his nerves and clear his mind – it seemed to work!