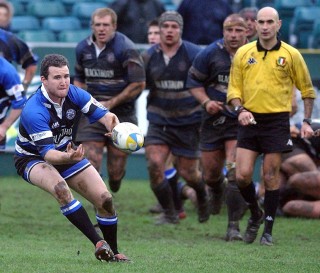 Chris Malone became (Australian Head Coach) Michael Foley’s second signing for the club when he put pen to paper over the summer of 2002, ending his association with the Exeter Chiefs. Chris had joined the Chiefs after appearing in his native Australia for Sydney University and Manley, alongside Wallaby internationals Phil Waugh and David Lyons. Free-scoring in the 2001/2002 season with Exeter (he scored 311 points in 28 appearances), Chris crowned his first appearance for Bath with a try and two conversions in the 14-15 defeat to Bridgend at the Brewery Field in August 2002. He followed that up by appearing in the Cardiff friendly and then kicking a drop goal on his league debut in the 24pts-22pts defeat of London Irish on 1st September 2002. Showing a range of kicking that impressed the travelling Bath faithful and some deft hands that paved openings for the midfield, Chris was handed the responsibility of the pivotal playmaker’s role in the absence of the injured Mike Catt, going on to make twenty appearances in his debut season. The following year saw Chris really come to the fore for Bath as his ability to slot into the side whenever required played a major part in Bath finishing top of the Zurich Premiership and narrowly failing in the Zurich Championship Final. He made nineteen appearances in 2003/2004 (sixteen starts) and contributed 101 points to the cause, including six drop-goals (a Bath seasonal record in the professional era), despite starting the season on loan at local rivals Bristol Shoguns. Chris is also an Australian U21 international, having been capped at that level while playing in the Southern Hemisphere.

At the time of writing is Head Coach at the University of Sydney.