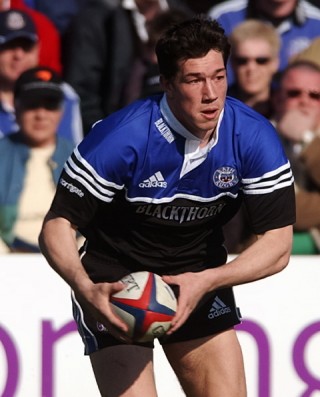 Tom Voyce made his full 1st XV debut against Saracens in the long forgotten Cheltenham and Gloucester Cup victory in 1999 as a replacement for Tokunbo Adebayo. Signed from the Bath Rugby Academy, Tom emerged into a top quality player. A representative of his county and school in both rugby and cricket, Tom gained his first England under-19 cap in the 2000 FIRA Championship, before joining up with the under-21’s for the SANZAR Championship a year later. He had to wait for his first full start for Bath though and that came in an 18-17 friendly victory over Glasgow in January 2000. Successfully breaking into the first team on a regular basis in season 2000/2001, Tom ran in his first Bath Rugby tries when he crossed for a brace in a 36-13 win over Northampton at the Rec. He went on to finish the season with twelve tries in only nineteen matches, including a hat trick in the 68-12 thumping of Rotherham at Clifton Lane. Rewarded for his tenacious approach with a first full England cap on the summer tour of Canada and the USA in 2001, Tom continued his rich vein of form in Europe in 2001/2002. He crossed for six tries in the pool stages of the Heineken Cup to head the leading try scorer list, but was unfortunately unable to reproduce the form in the Zurich Premiership where he managed just the one score. Another excellent season followed, on a personal level at least, as Tom took his career tally of tries for the club to 25 with a further half a dozen scores in 28 outings in a struggling side that just managed to stave off the threat of relegation with a final day win over Newcastle Falcons. That was to be the last time the Bath fans saw Tom in action at the Recreation Ground and he marked the occasion with a blistering try racing clear from thirty yards, and stepping in and then out, to blaze away for a much needed try as Bath won 24-12. His final appearance was in the Parker Pen Challenge Cup Final at the Madejski Stadium, Reading as Bath were defeated by London Wasps, ironically the team that Tom had agreed to join earlier in the year. While with Wasps Tom added to his initial England cap, playing in two matches on the 2004 tour to New Zealand and Australia.

Tom’s great uncle (another Tom Voyce) played for Gloucester and was capped 27 times by England. He was a member of the first double Grand Slam England teams.

Transferred To: London Wasps,  and subsequently played for Gloucester and London Welsh.

Tom’s great uncle Thomas Voyce played for Gloucester in the 1920’s and won 27 caps for England including playing in the first Grand Slam winning side.