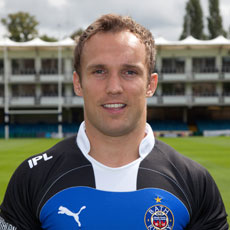 The Scottish scrum-half arrived at Bath Rugby in 2010 from Glasgow Warriors.

Mark was a robust scrum-half with very good kicking skills and the ability to make effective, darting runs. His physicality and ability to challenge opposition defences around the ruck have strengthened the variety of styles of half back combinations Bath have on offer.

Mark has represented Scotland in all the age groups.