by Russell Gibbs and Geoff Pilinger 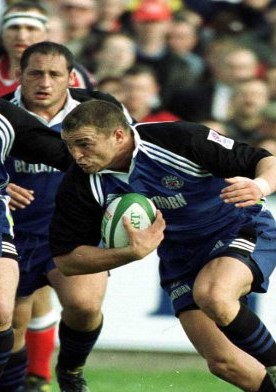 Likeable prop forward Chris Horsman signed for Welsh/Scottish Premier League side Bridgend in the summer of 2002, after spending the whole of season 2001/2002 on loan at the Bedford Blues. Chris, who progressed into the Bath Rugby first team from the Academy, set up going through the entire Junior ranks, made his senior debut in the Heineken Cup match at the Scottish Borders in September 1997. He came on as a replacement for Dave Hilton and capped a fine performance by scoring a try in the 31-17 victory. Chris ended up playing sporadic matches for the first XV in season 1997/1998 due to the quality ahead of him, and took his chance to play first team rugby when Bedford came calling. In total he played 46 times for Bath (22 as a replacement) and crossed for three tries (his other two scores being a brace against Oxford University). Chris’ representative career saw him selected for England at under-18 and Colts levels, before England under-21 honours in the 1997 Five Nations under-21 Championship. Chris played in the games against Scotland, Ireland and France (registering a try against the Irish) and did enough to merit an inclusion on the 1997 under-21 tour to Australia. Latterly, he performed admirably for Bridgend RFC and  the Celtic Warriors before joining Worcester in 2004 after the demise of the Welsh provincial club.