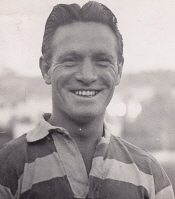 A product of Bath Schools rugby he was the first such player to play in a Bath XV in 1936.

A Committee man from 1953 serving on the Grounds Committee, Bar Committee, and as a Selector, Colts XV Manager and as Club President.

He formed an exciting partnership with Tommy Hicks both for the club and Somerset County.