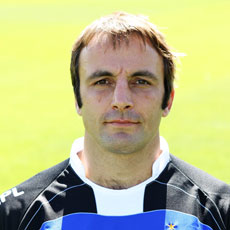 Thirty three times capped England international lock Danny Grewcock arrived at the club in the summer of 2001 from London based Saracens. The signing of such a high profile player, proven in the rarefied surrounds of the test match arena, was seen as a major coup for Jon Callard and Grewcock’s lock partnership with Steve Borthwick made Bath’s second row one of the most feared in the Premiership. Making his Bath Rugby debut in the first match 6-10 defeat at the hands of the Leeds Tykes, Danny went on to make twenty-six appearances last season. This cemented his place in the Bath line up and ensuring that he managed to stay at the forefront of the thoughts of England coach Clive Woodward. The former Coventry player has also represented the Barbarians and played a major part in all three tests on the 2001 British Lions tour to Australia. At the beginning of the 2002/2003 season Grewcock was elected Captain of Bath Rugby in a move that clearly delighted him. Michael Foley, the Bath Rugby Head Coach told the Official Bath Rugby website: “All teams have a group of leaders and it is important that the announcement of a captain does not detract from all players contributing and staying involved. Danny is a person we feel demonstrates the right approach both on and off the field of play to lead the team into the forthcoming season. His preparation and mindset as a professional is second to none and provides a shining example for our whole club to aspire to.” Few who had witnessed the career of this talented individual would disagree with those sentiments. Nicknamed ‘Robolock’ due to his remarkably consistent performances for both Bath Rugby and England, Grewcock was an integral part of the make-up of the Bath Rugby pack as they embarked on the challenge of scaling the heights of rugby success once more. That second season saw Danny make 31 appearances as the club fought it’s battle against relegation and there were times when many questioned the decision to appoint him skipper. A red card in the Parker Pen Challenge Cup Final with London Wasps proved his hot-headedness, so the argument went. But for 2003/2004 Danny was back and gaining rave reviews again. His performances earned him a place in England’s RWC 2003 squad, but an injury to his big toe, caused by Northampton wing Ben Cohen in training, saw him depart the tournament early. It was a crushing blow for Danny who subsequently missed out on England’s big night, but did receive his winner’s medal upon the triumphant squad’s return. Awarded an MBE and the freedom of Bath, along with Mike Tindall and Iain Balshaw, Danny returned to club duties and led Bath to the Zurich Championship Final, having topped the table at the end of the regular season. A mature Grewcock was seen in these latter games, typified by the big man’s decision to hand over the captaincy in key end of season games to the experienced hooker Jonathan Humphreys, enabling him in his own words to ‘fully concentrate on my performance on the pitch’. And so he did, performing brilliantly, as Bath went ever so close to re-gaining their Championship crown.

Danny Grewcock, having reached the ripe old age of 38, decided that it the time was right to retire from the playing side of rugby. He took up a post as Academy Forwards Coach for the Bath Club, using his vast and in depth knowledge of the modern game at all levels, to develop the skills and mental attitudes required of the modern player Danny was a much coveted signing back in 2001. Head Coach of the day, Jon Callard said; “this is a stunning signing for Bath Rugby Club. Danny is an exceptional talent who without a doubt will add to a very exciting squad. I am sure that his ball winning and ball carrying abilities will help to create the platform off which our backs can play to their full potential. Danny also brings with him a wealth of experience, which will help the development of our younger players.

Danny joined Bath from Saracens in 2001 and was the backbone of the pack until his retirement. He was renowned for his rugged, no nonsense approach and his competitive hard edge sometimes got him into deep water with the officials and the RFU. Even so, he managed to play 65 times for his country and toured with the British Lions.
He was a thoroughly nice bloke who physically led from the front, had a great attitude and was an important and great player for the Bath Club.
He formed a formidable 2nd row partnership with fellow international Steve Borthwick and was respected wherever he played.

Danny resigned as the club’s Academy Manager in 2016 to take up a position as Director of Rugby at Oundle School.