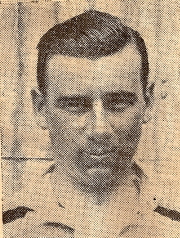 At school he gained distinction as a soccer centre-forward and his introduction into rugby was largely due to J B Hannah who persuaded Powell to turn out for a Junior XV. He did so well that he gained a place in Taunton 1st XV and was given a trial for Somerset at Fly half.

Louis joined Bath in 1926. He was an excellent utility man and could fill almost any position outside the scrum.

Louis was a strong runner of excellent physique and possessed a splendid pair of hands and a powerful kick but was very temperamental. He had great defensive qualities and would rise to the big occasion. Cheerful and good tempered, he had a real sense of humour, and the ability to really enjoy jokes about himself.

For many years he was a prominent estate agent in the City.