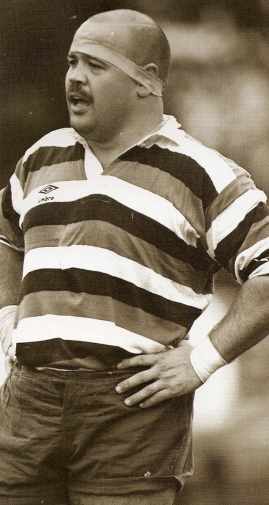 Began his rugby career with Old Redcliffians, a Bristol junior club, as a hooker, later switching to loose or tighthead prop on joining Bath.

His potential was recognized at an early age with selection for Somerset and South and South West Schools. He graduated to the successful Bristol Combination side – Old Redcliffians and later – eastwards to Bath.

He became a dominant figure in the Bath pack, with the ability to play loosehead or tighthead prop. An early highlight in his career was selection for the South and South West Division which drew 12-12 with the Australian tourists at Exeter in 1984.

His performance earned him the first of his 15 England caps against Australia that season.

He was a British Lion’s tourist to Australia in 1989 in company with Andy Robinson and Jeremy Guscott.

Coochie was popular with players and spectators alike throughout his career and his fellow players nicknamed him “the Don”.

In the fashion of sport mixed with show business he appeared in the Bath Theatre Royal Pantomime on more than one occasion using his popularity to good effect with the younger generation.

The former Bath, England and British Lions player has always been recognised as one of the game’s true characters. When in full attack, his famed headband and trademark moustache, coupled with his fearsome visage were never calculated to put his opponents at ease. Always giving the game 110 per cent, he gained respect both in this country and abroad.

As an after dinner speaker Gareth “Cooch” Chilcott has a raft of amazingly funny rugby anecdotes that have been enjoyed at sporting and company dinners all around the country. A natural entertainer, he has even done pantomimes!

Gareth also has a long list of television work under his belt including commentating for ITV Sport, presenting for HTV Local Sport and several guest appearances as a rugby pundit.

Coochie made a name for himself as an actor in Christmas Pantomime at the Theatre Royal, Bath

Due to internal strife at Bristol, Chilcott left his home town in the late seventies along with Nigel Redman and Richard Hill to join West Country rivals Bath. Together with players of the calibre of Jon Hall, Stuart Barnes, Andy Robinson and Jeremy Guscott, they helped make Bath the dominant force in English rugby in the 1980s. The Bristol born trio all went on to make their international debut in 1984, Hill on tour against South Africa in the summer, Chilcott and Redman in a 19-3 defeat by Australia at Twickenham the following autumn. Gareth then missed out in the 1985 season but played against Ireland and France respectively the following year. In 1987 Chilcott earned notoriety by being one of a group of players to be suspended following a violent brawl with Wales in Cardiff, apparently incited by Bath teammate Hill. For a time thereafter he was labelled as being a dirty player, an unfair slur on someone who held all the game’s best traditions and values close to his heart. Despite his Cardiff disgrace, Gareth was selected for the 1987 World Cup and played in three matches, including the quarter-final defeat by his old friends Wales. After two appearances in 1988, Gareth’s last season of 1989 was easily his best and saw him play in three out of four matches in the Five Nations. Sadly, despite much improved performances, England’s dream of a first title since 1980 was dashed when they lost to Wales for the fourth match in a row, thus continuing a drought at Cardiff that had lasted since 1963. However, Gareth’s performances had not gone unnoticed and he was selected for the British Lions tour to Australia that summer. He did not feature in the tests, but was a popular tourist and a hugely crucial component in the success of the midweek side, otherwise known as “Donal’s Doughnuts”. During that tour Gareth took it upon himself to be a central figure in all social occasions and also filter out abusive letters being sent to his skipper Finlay Calder! In retirement Gareth carved out a name for himself as an after dinner speaker, television pundit and a partner in “Gullivers”, a company specialising in organising rugby holidays to foreign fields.