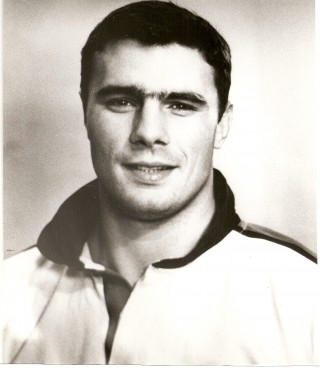 The giant flanker or number eight started his career with London based side Saracens, before deciding to join Bath when the opportunity presented itself in 1991. To be fair to Clarke at that stage it wasn’t a difficult decision to make. Bath was widely regarded as the best club side in the Northern Hemisphere, while Saracens struggled around the basement of the English First Division. How times have changed for both sides since those days! Clarke made his debut for Bath on the 7th September 1991, in an early pre-season friendly fixture with Pontypool. The former Welsh giants weren’t as strong a side as in the 1970’s and 1980’s and Clarke had an easy time of it as his new club cruised to a 28-12 victory. Ben was to become a permanent fixture in the Bath back row after that making 86 appearances and scoring 25 tries up until the start of 1996– the year the game became fully professional. Lured by the prospect of captaining an up and coming Richmond outfit Clarke left the Rec. that summer and donned the yellow, red and black of Richmond to great effect, until their untimely demise. Clarke returned to Bath for the 1999/2000 season and played a further 50 matches (crossing for nine tries) before leaving the club for a second time and joining ambitious Worcester. His talent was recognised in forty caps for England (three tries), five for the Barbarians (three tries) and the ultimate pinnacle of three test matches for the British Lions on the 1993 tour to New Zealand (he played in eight matches in total on that tour). Indeed, such was his impact on the trip down under, in a poor Lions side, which the Kiwi public (who know a good rugby player when they see one) suggested that he was the only Lion who they would take for their own! A consummate professional, Clarke led Worcester to second place in the National League Division One in 2001/2002, eventually hanging up his boots having helped Worcester towards their ultimate goal – promotion to the top flight.