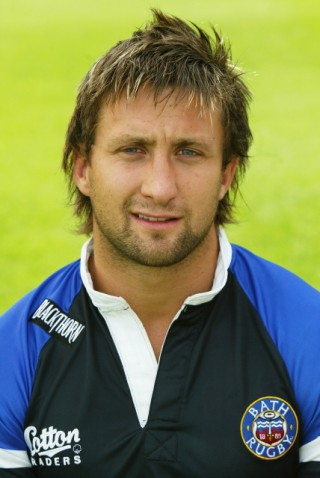 Simon Danielli made his debut for the club in the shock defeat at Leeds Tykes in September 2001 having made the short trip to the Rec. from local rivals Bristol Shoguns where he had made one appearance. While at the Shoguns, Simon was an integral part of their title winning under 21 side, running in several tries of the highest quality and earning him rave reviews in the process. Having represented England at junior levels, Simon’s talent is unquestionable and with an eye for the try line and raw pace to match he became a Bath favourite. Simon opened his Bath try scoring account with a barnstorming finish against Saracens in September 2001 (from the left wing) and also crossed for a crucial score in the return fixture with the Tykes at the Rec. in April (from the right). In total Simon made 18 appearances in the 2001/2002 season, becoming somewhat of a regular in playing the final eight matches of the season on alternating wings. Despite being born in Edinburgh, Simon has represented England at under-18 level and played in the same England sides as Jonny Wilkinson, Iain Balshaw and Mike Tindall at that age group. He would surely have made the transition to the under-21 set up only for injury to intervene. England’s loss was to become Scotland’s gain though as the Edinburgh-born Danielli was called up to the full Scotland squad in late 2003 after an excellent second season with Bath that yielded 8 tries from 25 starts. Simon’s international debut came against Italy at Murrayfield and after a good performance against Wales he found himself on the plane to Australia for the 2003 RWC. A try on his competition debut as a replacement against Japan was followed by a brace against the USA as Simon cemented a regular spot in the side. Upon his return to Bath, he managed a further 17 appearances in 2003/2004, finishing with seven tries to take his carer tally for the club to 22 (including friendly matches). Bath Rugby Appearances: 2001/2002 – 2003/2004: 58(4) Bath Rugby Points: 85 – 17t Bath Rugby Friendly Appearances 2000/2001 – to date: 3 Bath Rugby Friendly Points 2000/2001 – to date: 25 – 5t Scotland Record: 11 caps: 2003 – Ita, Wal, Jap (WC – rep), USA (WC), Fiji (WC), Aus (WC), 2004 – Wal, Eng, Ita, Fra, Ire Scotland Points: 25 – 5t

Signed From: Bristol Shoguns Transferred To: Ulster Also Played For: None