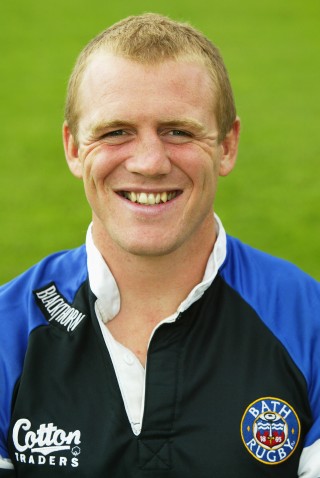 A strong running and hard tackling centre, Mike was educated at Queen Elizabeth Grammar School in Wakefield, signing for Bath Rugby upon completing his studies there. He made an instant impact in the Bath first team flashing over for a brace of tries on his senior debut, a 60pts-15pts thumping of Oxford University at the Rec. The performance he put in that evening boded well for the future and he was included in five further matches that season, including a league debut as a replacement for Matt Perry in a comfortable win over Bristol. He may wish to forget his first full league start though as Bath crashed to a 23pts-50pts thrashing at the hands of a rampant Saracens at Vicarage Road just prior to Christmas. Undeterred by this welcome to league rugby, Mike came back stronger from the experience and claimed one of the centre berths as his own in the 1998/1999 season. He seized his chance when injury played havoc with the Bath midfield, ruling out Kevin Maggs, Jeremy Guscott and Phil de Glanville at alternative stages. Over the years between 1999 and 2002, Mike became an integral part of the Bath Rugby team, using his pace and power to crash holes in the opposition defences and create chances for the Bath wings to finish in style. He was rewarded for some consistent performances for his club with a debut cap in the mauling of Ireland in 2000, gleefully diving over for a debut try. It was inevitable with England going out all guns blazing that Mike should retain his place and he became an England regular playing in nine further tests in 2000. Injury struck throughout the 2000/2001 season though, ultimately costing him a place on the British & Irish Lions tour to Australia. A career threatening knee injury curtailed his development further and from February until September 2001 he faced months of physiotherapy. He made a comeback in the league clash with Saracens at the Rec. that month and was recalled to the England side, scoring two tries in the rout of Romania. Mike continued to flit in and out of the squad due to international call-ups and the occasional knock, but still managed 20 appearances. The following season was much better for the robust centre, managing 22 games and crossing for five tries, including one in the Parker Pen Challenge Cup Final defeat to London Wasps. His form was so good that when selection for the 2003 Rugby World Cup was announced Mike was a dead-cert in the England midfield and he played in three of the pool matches and the Quarter Final victory over Wales. With England struggling though, Mike Catt replaced Tindall in that match and Catt kept his place for the Semi Final against France. Despite a comfortable England win Mike was recalled to the starting XV for the final with Australia and went on to claim a Rugby World Cup Winners medal after England’s sensational victory – the highlight of his game probably being the unceremonious dumping of Wallaby ‘skipper George Gregan in the first half. Upon his return to the Rec., and after receiving an MBE and the Freedom of Bath, another injury cut short his club season and, frustrated, Mike made only sporadic appearances. After the defeat of Sale in early April he was not seen again until five games later when he claimed a spot in the Zurich Championship Final XV that faced London Wasps at Twickenham.