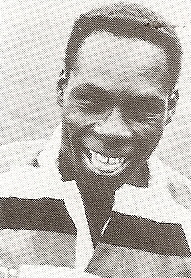 During his school career he broke a number of England Schools U15 and U18 try scoring records. Joined Bath at the age of 18, as a very talented teenager.

Extremely fast and elusive winger and a good tackler.

Adedayo Adebayo made the trip to join Parma at the end of the 2000/2001 season, his testimonial year. ‘Ade,’ as he was popularly known amongst the Rec. faithful, spent over ten years with the West Country giants lending his explosive power and devastating eye for the try line to the Bath cause; making his Bath debut on the 27th September 1989 in a 40-15 home drubbing of South Wales Police, Adebayo was at the hub of most of Bath’s success during the next decade. Prior to the professional era the affable wide man ran in 41 tries in 95 games, and when one considers his finishing tally of 90 tries in just 220 matches you begin to appreciate what a very good player he was. The season 1996/1997 was undoubtedly his finest in the Blue, White and Black as the dawn of professionalism saw clubs playing with verve and excitement, spinning the ball wide at every opportunity. Adebayo profited to the extent of the sensational record of 24 tries in only 26 outings. Whilst his latter years with the club brought a reduced strike rate, his influence on proceedings was nonetheless still important. Indeed, on a sultry afternoon in Bordeaux it was Adebayo’s chip and chase that drew a late challenge from a Brive defender and thus gave Jon Callard the chance to etch his place in Bath folklore by kicking the goal that won the European Cup. Incredibly for a player who was such a prolific try scorer, his talents were neglected at the highest level. His paltry total of six caps (that yielded two tries in Argentina – with his debut being in 1996 against Italy at Twickenham) was scant reflection on the quality of his play, although he had the honour of being a member of the England Sevens Squad that won the 1993 Rugby World Cup Sevens. Adebayo was only selected once for the Barbarians as well, but despite this, his legend will live long in the hearts and minds of those who saw him dashing down the wing for Bath.