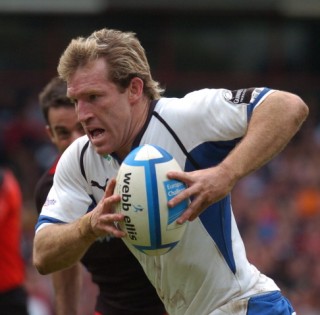 Shaun arrived as a virtual unknown as cover for Bath’s much-lauded centres during the 1999 World Cup. Such was the pace and enthusiasm shown by the Australian Under-21 international that he was to make 24 appearances by the end of that campaign (his debut being in the pre-season match at Bridgend where he replaced Jon Preston) scoring five tries, his first coming in the 33-13 home win over Northampton. But it was season 2000/2001 when Shaun’s star really shone. In a season that saw him make a further 20 appearances (five from the bench), the centre crashed over for eleven tries putting him second in the top scorers list at the club. Amongst the tries he scored were two braces, in the European victory over Newport (as a replacement) and in the rout of Rotherham at Clifton Lane. Considering he only started half of the matches played, then his impact can be described as astonishing. Having carved a place in the hearts of Bath supporters (a hat trick against Gloucester having helped), Shaun decided that his ultimate career path lay in his native Australia and so headed back down under in pursuit of a full Australian cap, having earlier earned caps at junior levels with the Wallabies, signing for Sydney-based Randwick. If his time at Bath is anything to go by then that honour will come his way sooner rather than later and his performances in the 2003 Super Twelve competition for the New South Wales Waratahs. Shaun’s second spell at Bath was from 2006 to 2009 before he left to join Leinster where he teamed up with Michael Cheika who was the club coach. Subsequently he played for Calvisano before retiring from playing.

When he finished playing he became an assistant coach at Western Force Attack Coach to the Australia team.