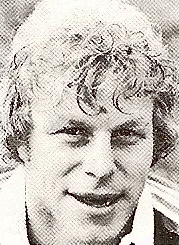 Spurrell’s contribution to Club success was incalculable. It would be fair to attribute much of Bath’s ‘hard edge’ to the influence of this ex paratrooper and his uncompromising attitude. Without doubt one of the best, if not the best, flanker never to play for England.

Off the field, his life was equally colourful: he was elsewhere listed as a shepherd and was also involved in diverse business ventures. Among the most memorable was his partnership with former stalwart Pete Heindorff in ownership of “The Island Club,” which was a late night drinking spot converted from a below ground city centre public convenience. To this day – locals refer to it as “Bog Island.” Fellow rugby players acted as part time bouncers to maintain a degree of order and exclusivity.

This was also the period for younger element ‘rave’ sessions and Roger was very much involved under the banner of “Universe.”

In 1995 he upgraded an old cafe in Polzeath, an area which attracts Cornwall’s surfing set. Presentation of ‘Sexy fish & chips’ is a menu theme. He entrusts the day to day management of this and other expanding gastronomic facilities to his two sons.

Roger took up captaincy following injury to scrum-half Damian Murphy in March 1982 and remained as captain for the next 3 seasons.