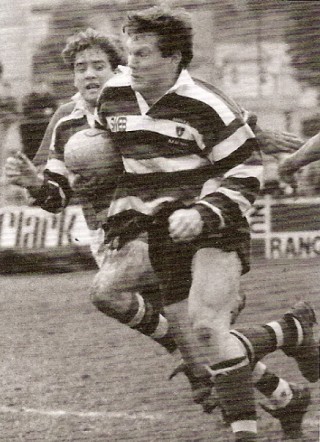 Played for Teignmouth, Richmond, Libourne (France) and Oxford University before coming to Bath.

Strong, aggressive runner he also played 140 games for Leeds Rugby League Club and is the only player to have represented a team in a Pilkington Cup Final (with Bath) and the Silk Cut Challenge Cup Final with Leeds RLC in 1995.Jim Fallon was a big hit with the Bath fans during his spell at the club after signing at the start of the 1990/1991 season. His electric pace and bulky frame were ideally suited to the wing and he was notoriously hard to bring down. Jim signalled his worth on his debut for Bath on the 1st September 1990 when he burst over for two tries in a 34-17 away win over Pontypool in the days when matches against Welsh sides were commonplace. He had a magnificent strike rate for Bath in the pre-professional era scoring thirty tries in only 45 matches for a total of 120 points. His final game in that initial two-season spell was in the 1992 Pilkington Cup Final at Twickenham where Stuart Barnes extra time drop goal sealed a famous 15-12 win. Fallon’s physical attributes hadn’t gone unnoticed and he transferred in the summer to Leeds Rugby League where he spent some highly successful times. When the union game went open in 1996/1997 the opportunity was there for Fallon to return and he did so, signing for Ashley Levitt’s multi-national Richmond side, and achieving promotion to the top flight. In season 1998/1999 Jim returned to Bath for a second stint at the club although a severely restricted one. He only managed a further five games in the famous colours making his comeback in a 57-19 win over Bedford at home and playing his final match as a replacement for Ieuan Evans in a 31-43 loss at Harlequins on the 22nd November 1998. He retired from the game after this match after suffering a detached retina that meant he was unable to play again.

He was on the verge of a full England cap when he went to rugby league.