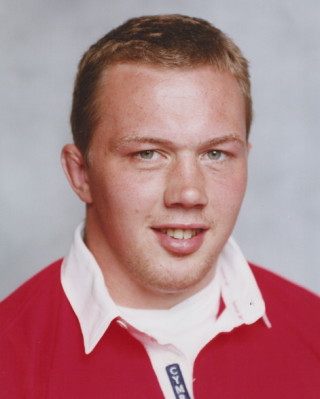 As with Gavin Thomas, Nathan Thomas was plucked from Bridgend Rugby to begin a career at the Recreation Ground with Bath. In Nathan’s case, he joined the club in time for the first year of professionalism in 1996/1997, making a first team debut on the 11th September 1996 as Bath Rugby annihilated Swansea 87pts-15pts in an Anglo-Welsh Cup match. He went on to complete 22 matches for Bath that season, crossing for three tries, the first of which was in the Heineken Cup quarter final defeat to Cardiff at the Arms Park. Emerging as the first choice flanker for his club, Nathan was in line for international duty. After making his debut as a replacement against South Africa in 1996 and coming on as a substitute during all three matches in Wales’ tour to North America, he finally won his first start. That came in the Autumn test with Romania in 1997. He then kept his place for the games with Tonga and New Zealand, the latter match taking place at Wembley Stadium in London due to the rebuilding works at the National Ground, Cardiff. Despite playing in twenty matches (ten as a starter and ten as a substitute) Nathan’s 2000/2001 season was cut short due to shoulder and neck injuries, and thus he was unable to add to his nine caps on the Wales tour to Japan that summer. Nathan, up to the end of the 2001/2002 season had played over 110 times for Bath, and yet was never considered a real regular. It would have been easy for the strong back row forward to sever his ties with the club and return to the land of his birth in order to enhance his test match chances, but he remained fiercely loyal to the Bath cause. His patience for further international honours was rewarded in 2002 when he was re-called to the Wales squad playing in the ‘A’ international championship. Ultimately though the lure of returning to his homeland was too much for Nathan and he left Bath in the summer of 2003, ironically after his best season for appearances in which he played 32 times, starting 29 of those. Nathan signed for the Cardiff Blues where his all action style continued to impress.-

Also Played For: Leeds Tykes; Llanelli, Llandovery and Hartpury College where he is now a lecturer