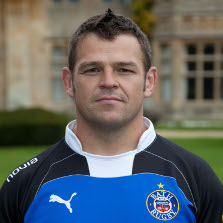 Known for his dynamic performances around the field, as well as his excellent basics, the hard-working Lee Mears was one of the most popular players in the game.

He established himself as the club’s first-choice hooker during the 2005/06 season and went on to forge a reputation as one of the finest hookers in the northern hemisphere, cementing his place in the England squad and regularly performing at the highest level in the Premiership and Heineken Cup.

A former pupil of the renowned rugby academy that is Colston’s School in Bristol, Lee represented England through the age groups before progressing to ‘A’ level in the 2004 and 2005 Churchill Cups and his first full cap in November 2005. He became Bath’s latest Test Lion when he started the series opener against South Africa in June 2009.