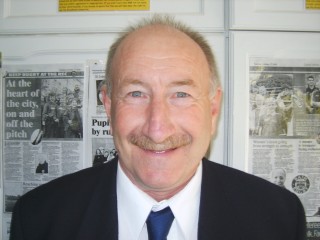 Ben Hartley was a Hooker who played 2 recorded 1st XV games for Bath. Ben would probably have played more 1stXV games but was up against  hookers of the calibre of Brian Collins and Alan Parfitt.

He was previously a Bath League Football Player.

Ben’s local “home” is Oldfield Old Boys RFC where he played for many years before dedicating himself to  “behind the scenes”  running of the club. He is a Past President of the club.

He is currently the Chairman of Bath Rugby Combination.

Ben produces the “Oldfield Flyer” – the Newsletter for the Past Players of the  Oldfield Old Boys Club and past pupils of the Oldfield School. It is a thoroughly professional publication and owes much to the thought, hard work and time that Ben puts in to its production.