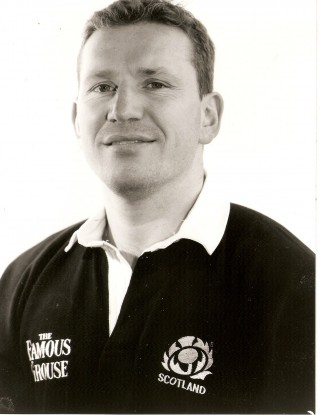 Captained the Bath team that won the Heineken Cup in 1998 and as such became the first British player to lift that Cup.

Played like an extra back row. He was a typical feisty Scotsman – he wasn’t afraid to have a bit of fisticuffs, even in a touch session!

Great scrum half with an excellent pass

Played for Scotland for 10 years and went on to captain his country, including the win against England at Murrayfield in 2000 which prevented England from winning the Grand Slam.

Andy began his rugby career at the age of six with Panmure Mini Rugby Club in Dundee. He played three seasons for Scotland Schools, and captained the U19 and the U21 teams. His first Scotland ‘B’ cap was won in 1991, where he crossed for the Scots only try. He has been capped 23 times by Scotland, the first being in January 1992 (Scotland 7pts England 25pts) and was a replacement on the British Lions tour to New Zealand in 1993.  Andy captained the Scotland team on tour to the South Seas in 1993. Additionally, he played for the World XV in 1992 in New Zealand to celebrate the NZRFU Centenary and for the Barbarians in the Hong Kong 7’s the same year and on their Easter tour in 1994.  Unfortunately an injury prevented him from taking any part in the 1995 World Cup. Formerly with Dundee High School Former Pupils, Andy joined Bath Rugby in 1994, making his debut in a 62pts-19pts win over Irish club side Garryowen at the Rec. on the 2nd September 1995. He competed with Ian Sanders and Charlie Harrison for the number nine shirt that season, but the following year had cemented his place in the side, being elected captain and leading the club to European Glory in Bordeaux. At the same time, he was selected to Captain the Scotland squad that toured Zimbabwe and South Africa. His full Bath Rugby career spanned 78 matches and yielded 27 tries and a solitary drop goal (scored in the amateur era). A prolific finisher in the first two seasons of professionalism (fifteen tries), Andy last pulled on a Bath jersey as a replacement for Gareth Cooper on the final day of the 1998/1999 season (a 76pts-13pts defeat of London Scottish at the Rec.). Andy left Bath in the summer of that year to join the Scottish Super District side Glasgow Caledonians, from where he won further Scottish international honours. Incredibly, Andy was selected on the British Lions tour to Australia in 2001 (after going on the 1993 tour to New Zealand, also as a replacement), but not in a conventional way! With the Lions squad severely depleted by injuries, Andy, who was hosting a tour party in the country at the time, was called up for the third test as scrum half replacement and allegedly spent the lead-up to the game learning the playbook! Unfortunately, for anyone who enjoys a fairy tale ending, Andy did not set foot on the park, but at least he can say he pulled on one of the most famous jerseys in rugby history again.

Also Played For: None.

He is now a BBC rugby pundit during the Six Nations