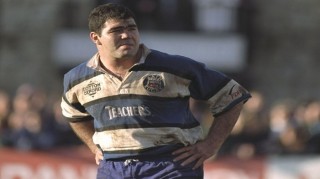 Argentinean born hooker Federico Mendez was a replacement for Mark Regan in the second half of Bath’s 19pts-18pts win over Brive in the 1998 Heineken Cup Final, and the then Northampton man played a full part in the Midlands club’s triumph in 2000. Mendez had a chequered career at the Rec. having joined the club at the start of the professional era in 1996. The hooker, capped 73 times by Argentina, signed on the dotted line along with compatriot German Llanes, signifying the dawn of a new age at the club. Mendez had been plying his trade with South African Super 12 Province the Natal Sharks when Bath made their move. On the 2nd December 1996 Mendez pulled on the Blue, White and Black for the first time in an experimental XV that hosted the Southern Hemisphere touring side, Western Samoa. The Samoans had previously defeated Ireland at Lansdowne Road, Dublin and were in the mood to add the scalp of the famous English club side to their list of vanquished foes. Bath had other ideas though and Mendez was everywhere in a sparkling debut that saw Bath emerge the victors by 36-17. Mendez went on to make 16 appearances that season, showing an eye for the try line that bought him seven tries in that time – an excellent record for a hooker. However, a year later and things had turned sour. Mendez left the club after appearing in only nine matches in the 1997/1998 season (starting a meagre five times) and losing his spot in the Argentinean test team in the process. His inability to cement a regular place ensured his departure and he joined Northampton Saints where he became first choice number two, leading to his second slice of Euro’ glory. Mendez eventually moved on to Begles-Bordeaux in France, before returning to his homeland and representing Mendoza Rugby.