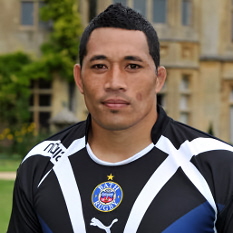 Arriving from the Hurricanes Super 15 franchise, the powerful scrummager added more strength and power to the existing front row.

A very powerful and technically accurate scrummager, the 6ft tall 18st 8lb tighthead prop was incredibly mobile around the pitch, making him a huge threat to opposing teams

Prior to joining Bath he had played for Hawkes Bay Magpies, Hurricanes and Highlanders.