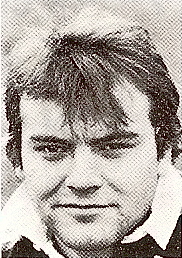 Played for SW Division in 1983 against the All Blacks and earned his first cap as a replacement against Scotland later that season. But for knee problems he would have won many more than his 21 England Caps. Last appearance for England in 1991. Following knee surgery and prolonged convalescence and physiotherapy he captained the England B side.

He scored tries against New Zealand All Blacks, Japan and Argentina.

During the All Blacks tour in 1983, the visitors had rated him as the best forward they had encountered. Some felt that in his prime he was quiet probably the best blind side wing forward in world rugby. At this time he was just 21 years old and was the only Bath forward in an otherwise all Gloucester – South & South Western Counties pack. Bath team-mates Horton, Palmer, Trick and Martin were in the backs.

On the 30th October 1993, he captained England South West at Redruth against the All Blacks with a narrow loss by 15 points to 19. Although generally quiet and gentle off the field, he was a ferocious looking competitor on it. When it came to the Haaka, his eye-balling scowl was put to good use in a memorable pre-match confrontation with Va’aiga Tuigamala!

He travelled with England’s World Cup Squad in 1987, but was forced to return when injured in training. Thereafter, he was plagued with knee cartilage problems, which hindered his playing career and international aspirations.

Despite this handicap, John was awarded 21 England caps and was recognised as one of the outstanding forwards of his day. Among his contemporaries, Jeremy Guscott rated him the best he had played with and in constructing his ‘Dream Team’ video, England skipper Will Carling stated that John Hall would be the first player on his team sheet.

In his biography ‘Smelling of Roses,’ Stuart Barnes highlighted his: “remarkable physical presence and mental hardness.”

Richard Hill considered: “His greatest attribute is his ability to pick a ball up, run forward, take four or five opponents with him and just keep going.” (Extract from article Paul Ackford – Daily Telegraph)

* 1993/4 Arguably Bath’s finest season with Pilkington Cup, League Championship, Welsh and Middlesex 7’s. This has not been equalled.

After his retirement John was appointed Director of Rugby at Bath (1995/6) during the formative period of the professional era, when he was instrumental in procuring players of the highest quality, such as Jason Robinson, Henry Paul and Federico Mendez.

He moved on to coach the Garryowen Club and took them to the All Ireland Final in 1999.