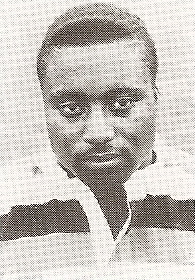 Flanker Steve Ojomoh was a cult figure at the Rec. soon after making his debut in September 1989 during the 35-12 win over Romanian touring side Steaua Bucharest. Steve made a total of 134 appearances for Bath in a career that spanned both the amateur and professional eras, scoring a total of 26 tries from the back of the scrum. Educated at West Buckland School, Devon, where he distinguished himself as an athlete, he applied his speed and agility to rugby and won representative honours for England Schools (touring Australia), England Colts and South West under-21. After joining Bath in 1989, Ojomoh found himself used initially as an understudy to Dave Egerton, but soon earned a first team spot playing in the 1992 League decider and the Cup Final against Harlequins at Twickenham, after Egerton was ruled out through injury. This led to an England ‘B’ call up, when Dean Ryan (then of Wasps) pulled out for personal reasons. Steve impressed enough at this level to earn selection on the ‘A’ team tour of Canada in 1993, where he played in both tests, which ultimately led to a full England cap in the 1994 Five Nations match with Ireland. An all action, energetic forward, Steve earned his rewards at the highest level gaining twelve caps in total for England, with the critics arguing it could have been more. Amongst his tally were appearances in the 1995 World Cup against Argentina, Western Samoa, Australia (as a replacement) and France in the third/fourth place play off. As well as his international caps, Steve was selected three times for the Barbarians, inevitably scoring a try in one match. A long and distinguished career with Bath Rugby was brought to a conclusion in 1998, when he played his final match for the club, against the touring Tonga National side at the Rec. He joined Gloucester at the end of the 1997/1998 season and latterly played for Rugby Parma, before joining Newport for the 2002/2003 season.