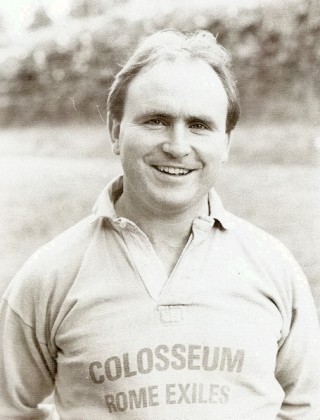 Tom played for the United and Spartans XVs in the main during the late 1970’s and played a valuable role in the development of the Club towards it’s premier position.

As reported in The Bath Chronicle, Tom Gunning gave up acting to join the Roman Catholic Church.

Father Tom served as Dean of Bath and parish priest at St John the Evangelist Church but is currently Vicar Forane at Corpus Christi Church Weston-Super-Mare.

Tom appears in a Clifton Diocese video talking freely about his life, his brief dabble with rugby in Bath colours, and how he put aside his ambitions of becoming an actor to take up the works of the Roman Catholic Church.

It is an interesting journey through Tom’s life – well worth watching. If you wish to watch it on the Internet, select Cliftondiocese.com

When first ordained Tom was in the parish of Filton, Bristol.

His playing career spanned the 1st XV, the United and the Spartans, as well as Roundhay and London Irish. He also appeared for Vatican City Nomads during his clerical training in Rome.