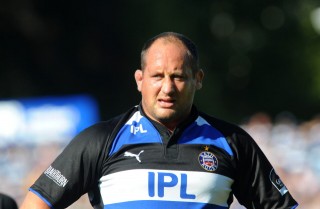 At the beginning of season 2000/2001, Bath Rugby were on the lookout for a prop forward to take the pressure off then regular front row men Clem Boyd, Victor Ubogu, Chris Horsman and John Mallett. NEC Harlequins’ David Barnes filled the profile and duly signed prior to the beginning of the new campaign. The likeable prop took part in the pre-season friendly at Llanelli, a match split into four quarters of twenty minutes, and did enough to warrant a starting spot in the first league match of the season against Sale Sharks. Thus, David duly packed down at Heywood Road for his Bath debut and acquitted himself well despite the disappointment of seeing the side beaten by the narrowest of margins, 31-32. David made the number one shirt his own for the opening months of the season, but understandably tired thereafter and shared the responsibility with Mallett and new arrival Simon Emms. Incredibly, after November, these three would rotate the front row positions between them, placing extra emphasis on their fitness and scrummaging skills. Testament to Barnes’ enduring physicality is the remarkable fact that since his debut in August 2000 he only missed one match through injury up to and including the end of 2001/2002. Indeed he has figured in every game played by the club, apart from that one fixture, in the last two years – a phenomenal achievement in an era, which exacts a heavy toll on rugby players. Barnes has notched one try for the club, the crucial opening score in the Zurich Championship Play Off semi final against London Wasps at Loftus Road in 2000/2001, when he burrowed over from close range. After an almost ever-present season in 2002/2003, the signings of David Flatman and Duncan Bell forced David out of the starting line-up. However, when called upon, as he was sixteen times in the year, he continued to excel and formed a crucial part of Bath’s re-emergence as a Premiership force. David also featured in three Barbarian line-ups and plied his club trade at West Hartlepool and Newcastle Falcons prior to joining Harlequins and was capped by England Students.

Due to continuing injury, David took ‘early retirement’ from the rugby field.
Prop David Barnes, who joined Bath from Harlequins in 2000, was one of the most respected figures in English rugby. He was an uncompromising competitor on the field and Chairman of the Professional Rugby Players’ Association off it.
A hard-working and dedicated professional, Barnes played in every match for Bath during the 2006-07 season and proved his tag as a durable front-rower by making more than 200 appearances for the club.
He was tour captain for England Saxons at the Churchill Cup in 2006 and has a wide range of interests away from rugby, including scuba diving.
In the summer of 2008, he climbed to the top of Africa’s highest mountain, Mount Kilimanjaro, to raise money for the PRA Benevolent Fund and for the Tamara Johnson Trust Fund.
During the summer of 2009 he was appointed one of Bath’s five player representatives for the 2009-10 season and also took his place on the Rugby Football Union’s Image of the Game Task Group.
David has earned respect throughout the Bath Club and the Premiership as a great scrummager and developed his game around the field to the benefit of his teammates. He featured alongside Matt Stevens, Duncan Bell and David Flatman and Nathan Catt

David was appointed RPA Rugby Director after retiring at the end of the 2011/12 season. In 2017 he became Head of Discipline at the RFU.