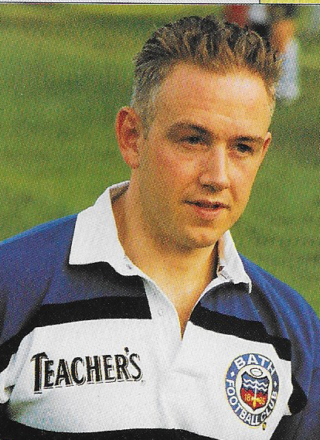 Son of rugby league commentator and schoolmaster( in charge of rugby at Cowley High School) Ray French Gary  followed his former team mate Adedayo Adebayo to Parma shortly after the Bath Rugby wing had announced his intentions to join the Italians. Gary’s Bath career was less spectacular than the aforementioned Adebayo lasting just twenty games, five of which were as a replacement. Signed from the Bath Rugby Academy, Gary made his first team debut in a 53-24 defeat of Exeter in a friendly match on the 9th December 1994. His chances in the starting line up were severely limited though due to the presence of Graham Dawe and the emerging promise of Andy Long. The signing of Argentinean international Federico Mendez pushed French further down the pecking order and once it became clear that Mark Regan was on his way from Bristol, Gary decided to move on. After only two appearances for Bath during the 1997/1998 season (against Newbury away and Newcastle at home), Gary moved on to join London Scottish and then had spells at Liverpool St. Helens, Orrell and London Welsh before eventually signing for Parma. Gary’s representative honours included a non-cap international appearance for an England Emerging XV.

A Chartered Accountant by profession.