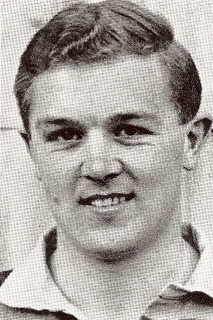 Career details:  Taught at Bedford School before joining the RAF where he became a fighter pilot rising to the  rank of Squadron Leader.

Geoff played in all international matches for England during the 1964/65 season.

A brilliant centre three-quarter who learnt his rugby at King Edwards School, Bath and played his first game for the Club in the United fixture against Wellington at Lambridge.

He soon was promoted to the 1st XV (playing his first game at 18 years of age) and then went to Cambridge University to gain his Blue and score the winning try in the Varsity Match in 1961. The Varsity team of the 1961-2 season was undefeated despite playing most of the top club sides in the country. Geoff gained two further Blues  in the 1962-63 and 1964-5 Varsity matches.

Geoff was record try scorer in England in the 1963/64 season, gaining this honour with two great tries in the last match of the season against Bedford for whom he later played before retiring.

Keen and active member of the Past Players Golf Society who with his knowledge of the French language is the organiser of the annual matches against the Dax Old Players.