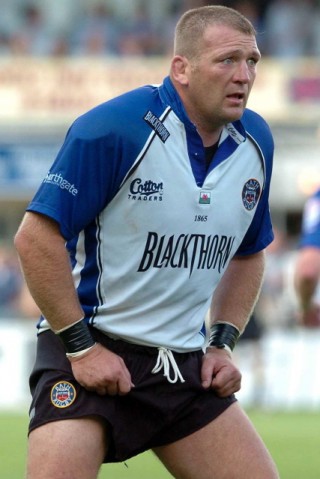 Former Welsh international captain Jonathan Humphreys joined Bath Rugby in the summer of 2002 after spending thirteen seasons with his former club, Cardiff. It was in the Blue and Black of Cardiff that Jonathan won most of his major honours collecting Welsh Leagues and Cups with regularity. However, his burning ambition was to win the Heineken Cup and he came close to achieving that in 1996, the year of the competition’s inception, but his Cardiff side were pipped to the post by a strong Toulouse team. First capped for Wales in the rarefied surrounds of the Rugby World Cup in South Africa, and against the New Zealand All Blacks to boot, Humphreys has gone on to claim thirty-five full international caps, his first as Captain being his third test against South Africa. The last of those caps was won at the Millennium Stadium as a replacement in Wales’ World Cup pool match against Japan. The tough, no-nonsense hooker also has two international tires to his name, against Ireland and the Barbarians, for whom he has made one appearance in the traditional match against Newport in 1994. The arrival of Humphreys at the Recreation Ground precipitated the departure of Mark Regan to Leeds Tykes, leaving the Welshman, Andy Long and Lee Mears as the clubs three hookers. Humphreys first donned the Bath shirt in anger in a pre-season friendly match with Bridgend at the Brewery Field in August 2002 and followed that up by returning to his former club for Bath Rugby’s second pre-season clash that year with Cardiff at the Arms Park. His league debut for the club was in the 24-22 win over London Irish at the Madejski Stadium, Reading in September 2002, going on to make more than 50 appearances in his first two seasons at the club and earning the honour of captaining the side in the absence of Danny Grewcock. Jonathan, educated at Cynffrig Comprehensive School (Kenfig Hill), Cardiff Institute and the Polytechnic of Wales, also earned representative honours for Wales Students (playing in the Student World Cup in Italy in 1992) and Wales ‘A’ (making a debut against France ‘A’ in 1995) and captained his country on 19 occasions.