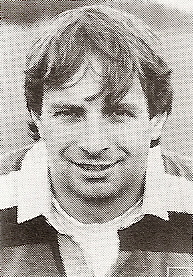 Previously played for Fylde and Swansea. Represented the North and SW Divisions.

Had the distinction of scoring 100 points in a season for Swansea and a repeat performance for Bath in the 1989/90 season, scoring 26 tries (104 points)

Five out of Tony’s six international appearances and also one Cup Final for Bath were on the left wing, not his favoured right wing.

Not a lover of training or wet weather, but like a fine red wine, improved with age.

Fantastic rugby brain and terrific feet with an incredible ability to turn defenders inside out.

A Chartered Accountant he was a partner of Dave Robson and David Taylor in the form of  Robson Taylor.