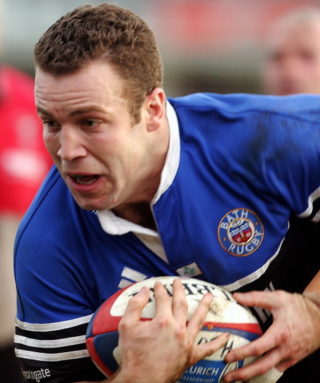 Block busting centre Kevin Maggs arrived at Bath from local rivals Bristol (where he had captained the Colts and U21s) amidst a wave of publicity in 1998 and the 70 times capped Ireland international (he has fourteen tries for his country) was almost an ever present thereafter. Kevin’s stylish performances and bullocking runs made him a popular figure at the club and beyond, hence two appearances for the Barbarians club and South-West Divisional selection, recognising his potent ability. He made his first team debut for the club as a replacement for Phil de Glanville in September 1998 and started his first league match a few weeks later in a home victory over Richmond. Twenty-nine appearances in his first year yielded just the one try (a late season effort against West Hartlepool) but the following season saw a much more prolific return from the bustling centre, as he ran in nine tries in 24 outings, his best return whilst with the club. Kevin’s rampaging runs as he blasted the ball up for Bath time and again were to become a regular occurrence for the next four years as he went on to complete 152 appearances for the side and cross for 25 tries. First capped as a replacement against New Zealand in 1997, two weeks later he started his first international for Ireland against Canada on the wing, where he scored his first international try. Kevin’s international career has been fairly consistent since, and saw him make three appearances in Ireland’s 1999 Rugby World Cup campaign. He would surely have made the 2001 British & Irish Lions tour to Australia had not a fractured cheekbone effected his performances during the 2000/2001 season. A committed performer and a difficult player to stop when at full throttle, Kevin struck up an excellent rapport and understanding with England’s Mike Tindall at club level, before signing for Irish Province Ulster in the summer of 2004

Transferred To: Ulster and subsequently played for Rotherham Titans and Moseley where he was player coach.