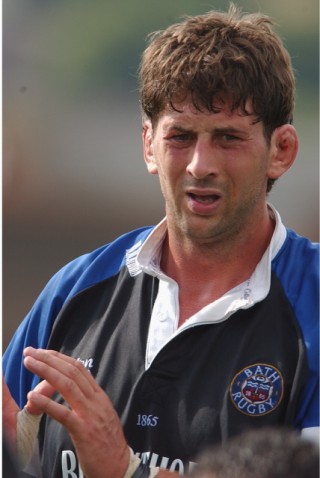 Honours: England Schools U18, England Colts, England U21, England A, and England (2 caps) against New Zealand and South Africa on the 1998 “Tour of Hell”

With over 250 appearances in nine seasons for Gloucester under his belt, Rob Fidler arrived at the Recreation Ground in the summer of 2003 essentially as cover for Danny Grewcock whilst the Bath Rugby Captain was on international duty at the Rugby World Cup. Rob struck up an immediate rapport with his second row partner Steve Borthwick from the first match of the 2003/2004 campaign at Leeds Tykes, which was Fidler’s competitive debut. The pair remained partnered for the next eleven matches until the Parker Pen Challenge Cup match at L’Aquila where both were rested. Rob went on to compete in thirty matches in his debut campaign, a testimony to his fitness and longevity. At 6ft 5” and 17st 7lb, Fidler is ideally built for a modern lock and achieved what is almost impossible – moving from Gloucester and becoming a favourite with the Rec. faithful! An England tourist on the 1998 ‘tour to hell’ where he was capped in the defeats to both New Zealand and South Africa, Rob also represented England Schools 18-Group, England Colts, England under-21, England ‘A’ and was selected for an English Rugby Partnership XV that played New Zealand.

When he left Bath he joined Cinderford RFC and subsequently went to Old Patesians RFC as a player/coach.